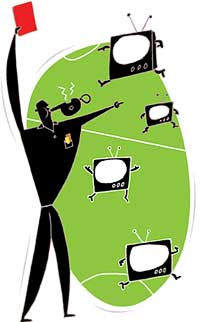 The new body headed by former chief justice of the Supreme Court J S Verma started work on October 2. It has powers to impose a fine of up to Rs 1 lakh on broadcasters in case of violation of norms for television content. It can also recommend to the ministry of information and broadcasting to revoke the licence of a recalcitrant broadcaster.

Currently, the Telecom Regulatory Authority of India regulates TV transmission and technology and the Ministry of Information and Broadcasting regulates content. The new authority was formed after the information and broadcasting ministry had asked the News Broadcasters Association to come out with its own set of guidelines on content regulation, after the association had raised objection to government intervention on the issue.

The body's mandate is: "Impartiality and objectivity in reporting, ensuring neutrality, non-glorification of crime, sex and violence, ensuring privacy of individuals, safeguarding information related to national security and judicious conduction of sting operations." Verma said, "Social sanction is more effective than legal sanction. If you have a lot of power, self-restraint is very important." Asked whether the fee of Rs 1,000 for registering a complaint would be a deterrent, the former chief justice said it was important to keep away frivolous complaints.