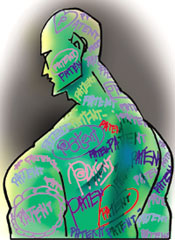 The word is out: nearly a fifth of all human genes have been patented. And there is more scary news: the majority of these patents are held private biotechnology companies. Writing in the us journal Science, Kyle Jensen and Fiona Murray of the Massachusetts Institute of Technology reported that nearly 63 per cent of the human genome patents are with private firms. One firm, the uk- based Incyte has intellectual property rights covering 2,000 human genes. The researchers also found that more than one company has rights over some human genes, such as brca1-- the gene that is usually linked to breast cancer.

Scientists fear that by monopolising specific genes, companies will exclude other researchers from studying them. Says John Harris, a professor of bioethics at the University of Manchester, uk, "The pharmaceutical industry argues that it needs to protect products of its research, otherwise it would not invest in future research. However, I worry that this kind of patenting could impact the cost of health care and the freedom to access it".

Helen Wallace of the international pressure group Genewatch, voiced another fear. "The patent grab threatens to skew research into areas where intellectual property rights are easy to secure," she said. "It encourages a search for genes, when many health problems could be addressed by better research on diet, and on social and economic factors," she added.