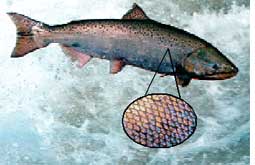 grilled salmon with lime butter sauce, salmon sushi, smoked salmonthe fish tops the list of a gourmets choices. It also does not stay behind in providing health benefits trapped in its oil. But the wild salmon populations are threatened the world over and reports say the farmed ones are too toxic to offer health benefits; the contaminants enter their body from fish food. Furthermore, the farmed salmon escape captivity and pass on diseases to the wild populations.

A worldwide assessment report said wherever farmed fish encounter wild ones, the wild population crashes 50 per cent. Hidden largely in the sea, salmon farms stretch over an area the size of four football fields. A million fish are crammed into them with some varieties 58 inches long and weighing about 23 kg. They escape their pens with ease.

Differentiating between the farmed and the wild is the trickiest part. Identifying physical features, tagging and fin clipping were tried in vain.

Researchers from the Scottish Association for Marine Science and the National Oceanography Centre in the UK decided to examine the fish scales of the Atlantic salmon for a solution. Fish scales grow throughout the lifetime of a fish. They consist of biominerals picked up from the waters the fish visited.

The common element that accumulated and stayed stable in the bodies of the farmed fish was manganese. It was missing from the wild ones making it the key marker. Based on this, the researchers differentiated the two with 98 per cent accuracy. Further research led the team to pinpoint fish food as the source of the manganese.

But managanese is not all. A report released in 2003 found high level of polychlorinated biphenyls, in farmed salmon. The fish food was held responsible. This makes the farmed salmon susceptible to diseases that are passed on to the wild ones by the escapees.

Although this study, reported in the September 18 issue of the Marine Ecology Progress Series , makes an effort in the field of wild salmon conservation, the solution is far from here.

Scientists suggest escaped farmed fish in the wild should be treated as an alien species. By interbreeding they threaten the wild salmons survival. Yet, the billion-dollar farmed salmon industry is growing and it has the federal governments approval.