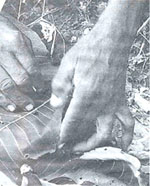 THE first Conference of Parties (COP) to the Convention on Biological Diversity, held in Nassau in the Bahamas, which concluded in the 2nd week of December 1994, showed a shift in focus on certain key issues. The member nations seemed more concerned with issues like bio-safety and the dangers posed by the biotechnology industry. Issues regarding the sharing of benefits with the indigenous population took a backseat.

The issue of bio-safety relates to introducing genetically engineered organisms into the environment. The g-77 countries are unanimous in their call for a protocol on bio-safety. India strongly called for a "comprehensive, legally-binding agreement on bio-safety" to prevent the developing nations from becoming a laboratory for experimentation, and to track the use of genetically modified organisms (GMO). "The hasty use and experimentation of GMOs could have repercussions which we cannot even begin to imagine," said environment and forests minister Kamal Nath.

However, the industrialised countries do not favour a protocol. Representatives of the developing nations believe that the industrialised countries are in the sway of powerful domestic industrial lobbies. Greenpeace says that it has unearthed at least 30 cases of companies from the North releasing gmos in the developing countries. Richard Godown, a senior vice-president of the us Biotechnology Industry Organization, has described the concept of a protocol as a "dangerous idea to have floating around".

The other issue relates to the Global Environment Facility (GEF): almost from the day it was set up, developing nations, mainly G-77 nations, have vehemently spoken against the World Bank-controlled gef which, they feel, curtails its credibility. The GEF, they say, lacks transparency and accountability, and is blatantly inclined towards the North.

The industrialised countries, obviously, vigorously support the GEF, labelling it as the most viable institutional structure for conservation. The cop witnessed a clash between the 2 camps when the Northern governments unanimously supported the GEF, while the g-77 countries were sadly divided on the issue. China appeared ready to support the gef as a permanent mechanism; Malayasia and Brazil opposed it. Many of the g-77 countries sought a separate mechanism. India felt that the existing structure is too uncertain and ambiguous to effectively serve the convention.

Despite controversies, the GEF was accepted as an interim measure by the cop member nations, reflecting some degree of reconciliation. The debate has now boiled down to inter-ministerial wrangling, with the finance ministers of almost all countries actively supporting the GEF, while environment ministers professing open scepticism, complaining about its weak controlling power.

It is ironic that while the United Nations General Assembly launched the International Decade of the World's Indigenous People on Decmeber 8, 1994, at the cop, indigenous peoples' issues received little attention. In spite of intensive negotiations at Rio in 1992, and subsequently at 2 intergovernmental meetings of the Convention on Biological Diversity in October 1993 and June 1994, compensation to the indigenous peoples for their "folk knowledge" is still being debated. Attempts by NGOs, too, did not yield the desired results. Some developing countries are reluctant to support the issue, fearing that it might dilute their demands for finance and technology.