Profitable in every way

Scientists develop method to use jute for making paper pulp 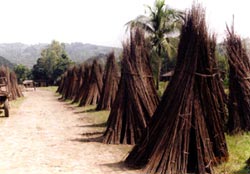 researchers from the Dhaka-based International Jute Study Group (ijsg) have developed a technology to produce paper pulp from jute -- the second most cultivated crop of Bangladesh. Revealing their breakthrough during a seminar held in May 2004, the ijsg researchers urged the government of Bangladesh to reopen at least one pulp-manufacturing unit. Three of the four key pulp units of the nation have been forced to closed, with the stocks of bamboo and softwood -- the commonly used raw materials -- expending.

Scientists across Bangladesh have been making efforts to find suitable substitutes. The ijsg researchers found jute most appropriate, as it is cost-effective and available in abundance. "Additional equipment need not be installed to make the pulp," claims G Mahiuddin, the lead ijsg scientist. "Tests conducted in the Karnaphuli mill -- the country's largest paper-manufacturing unit -- show that the 'extent' properties [sustainability] of paper made from jute pulp is superior to those of paper made from bamboo or softwood pulp," reveals Mamun Ur Rashid, one of the ijsg researchers.

As per the technology, the jute plant is dried for seven days after separating its leaves. In 1995, the Bangladesh Chemical Industries Corporation had made a similar attempt, but it could not succeed, as fresh jute plants were used.

Another exceptionality of the ijsg method is the use of biotechnological processes in conjunction with the conventional technologies during both the key steps of pulp production. The first step, pulping, is aimed at removing lignin, a plant polymer that binds cellulose fibres together. To do so, jute is either cooked at high pressure along with chemicals, or machines are used to grind and break its fibres. The ijsg researchers also made use of biopulping: pre-treating the raw material with selected strains of microorganisms that degrade lignin. During the second step, the resulting pulp is bleached to improve the brightness of the paper. For this, the ijsg scientists used biological enzymes along with the conventional chemicals.

They claim that the paper made from the jute pulp is suitable for wrapping and writing. According to them, the technology has several advantages -- it can help save forests by discouraging the use of wood. Secondly, it is easier to source jute, as it matures in 120 days whereas bamboo and softwood take five to seven years. The biggest benefit of the method is that it can help revive the jute industry of the country, which provides livelihood to millions of people. Bangladesh produces as much as one lakh tonnes of surplus jute fibre every year. According to the scientists, more than 1.5 lakh tonnes of pulp (which is the annual demand of pulp by the country's paper industry) could be produced from the surplus.

The parliamentary committee of the ministry of jute has shown keenness to use the technology. The scientists hope their innovation will not only help Bangladesh but other countries as well.