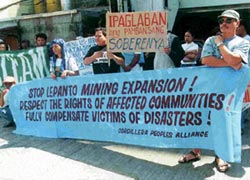 The Philippines is on the horns of a dilemma: to mine or not to mine?

The cash-starved Philippines government would like to regain its lost glory as a leading gold and copper producer. But the country's environmentalists are wary of the environmental risks that mining poses.

The country liberalised mine ownership rules in 1995, inviting a rush of foreign companies seeking permits. But the very next year, an anti-mining uproar ensued when tonnes of mine waste leaked into a river. Several hundred villagers fled their homes, farm animals perished and crops were destroyed along a 25-kilometre stretch of the waterbody. The tragedy forced the government to revise its mining rules and make them environment-friendly.

The liberalisation process has also been stymied by a long-running court battle challenging foreign ownership of mines. The Philippines was once a leading producer of gold, copper, nickel and chromite. Geologists say that since the country still remains one of the least-explored nations in the region, there is a good chance of finding more rich mineral deposits.