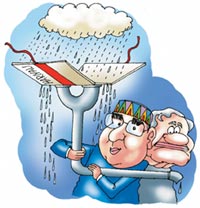 The Union government's newly launched Rs 1000-crore Hariyali (greenery) programme is one of the biggest rainwater harvesting projects ever to be conceived in India. "The scheme has the dual objective of tackling water scarcity problems as well as augmenting the resources of panchayats in an attempt to strengthen them," says Union minister for rural development, Shanta Kumar.

State-level bodies will provide technical assistance for rainwater harvesting and other conservation measures. The water thus conserved will be used for fisheries development, irrigation, horticulture and allied projects. Local panchayats are expected to benefit from water user charges and sales proceeds from the development activities. Monitoring committees headed by elected mps will keep tabs on the various development schemes in each of the 500-plus districts.

While inaugurating the scheme, Prime Minister Atal Bihari Vajpayee quipped: "It should not be a pipedream." But Sudhirendar Sharma, a water expert attached to the New Delhi-based Ecological Foundation, thinks this is exactly what might happen: "Given the dismal record of current watershed projects, the scheme might indeed turn out to be a pipedream. According to the latest statistics, about 15,000 habitations in the country are without any source of potable water; some 200,000 villages only partially covered by drinking water schemes and 217,000 villages have reported problems with water quality."

The Centre will contribute 90 per cent of the funds and states the remaining 10 per cent. But analysts feel that given the dire financial status the states are in, quite a few states might have problems coughing up even this amount.