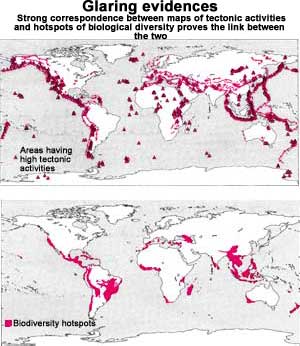 ever wondered why all regions across the globe are not as biologically rich as the Malabar strip or the Andean mountain chain. Biological diversity -- the sum total of plant and animal richness -- is not evenly distributed over the Earth's surface. More than 60 per cent of all known terrestrial biological diversity is concentrated in just about 1.44 per cent of the Earth's surface area and that too is restricted mostly to the tropics. In recent years, numerous attempts have been made to explain this colossal non-randomness. Giving an amateurish explanation, several researchers have argued that the patchiness could be a result of the inaccessibility of such areas to human invasion.

Recently, an ingenious explanation for such a distribution has been provided by Sagar Kathuria and K N Ganeshaiah, researchers from Bangalore-based Jawaharlal Nehru Centre for Advanced Scientific Research, and the University of Agricultural Sciences. They have proved that the uneven distribution, to a great extent, is a result of tectonic activities (changes in the Earth's crust). Their explanation stems from two rather common observations. Firstly, biological diversity is associated to be concentrated in regions with high altitude variations. Secondly, geologists have for long known that variations in altitude are mainly a result of the underlying tectonic plate movements that have taken place over a period of time.

To provide a scientific backing for the implications of these observations, the researchers analysed the congruence between the distributions of the tectonic activities with that of global biological diversity ( Current Science , Vol 82, No 1, January 2002). For this purpose they used a geographical information systems platform. Tectonic activity maps depicting the centre of concentration of volcanoes for the last one million years, and of the epicentres of 200,855 earthquake events were digitised. Thereafter, buffers of varying width (25, 50, 100, 200, 400 and 800 kms) were drawn around them to represent areas impacted by the tectonic activity. These buffers were then overlaid on maps depicting the hot spots of biological diversity or vascular plant richness. The spatial match or correlation was analysed using a variety of statistical techniques. The results indicated a strong correspondence between areas (buffers) with tectonic activities and areas with high biological diversity.

But why is biological diversity be more in areas with high tectonic activities? Landscapes stacked vertically (consequent to tectonic activities) as opposed to those arranged horizontally (as in the plains) are known to generate enormous spatial heterogeneity with respect to temperature, pressure and rainfall. Besides this, volcanism facilitates throwing up of mineral nutrients that are locked in the deep recess of the Earth. The heterogeneity coupled with nutrient richness often encourages the radiation of numerous species in areas that have experienced recurrent tectonic activities as compared to sites that have been geologically silent.