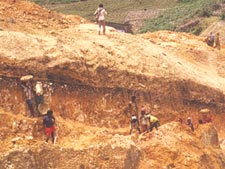 In a dramatic development, a division bench of the Madras High Court vacated the stay on the Tamil Nadu government order (go) that terminated licences for sand quarrying. The previous restraining directive was delivered by a single judge only a few hours earlier. The mining operations were meant to be carried out on leased out sites in the state.

"Neither party shall quarry until further orders," stated the bench, comprising B Subhashan Reddy and A Kulasekharan. It had admitted a state appeal against justice K Govindarajan's order staying the go on the ground that the government was not empowered to cancel licences without prior notice. The prohibition is operative for 160 of the 239 sites that have been identified by the state government for exploitation.