A proposal for a township near Bangalore as a lure to bring in huge investments from Japan is encountering opposition from farm and environmental groups. 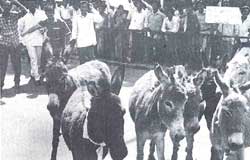 BANGALORE is witnessing dramatic protests these days against foreign businesses. Less than a fortnight after agitated farmers raided the offices of Cargill Seeds India Pvt Ltd (Down To Earth, January 31), there were demonstrations in the city against the state government's intention to approve construction of a model township near Bangalore for Japanese industry by the Japanese International Cooperation Agency (JICA). The protesting Anti-Japanese Township Forum (AJTF) paraded donkeys through the roads to symbolise the "stupidity of those helping the entry of foreigners, who would reduce the local population to mere onlookers of the entire economic process".

The tempers of the leaders of AJTF and of the Karnataka Rajya Raitha Sangha (KRSS), the state's main farm organisation, are rising even though the Japanese proposal is far from taking shape. The protesters contend farmers would be displaced if the township is allowed to come up at Sathanur and Bidadi, both about 70 km from Bangalore. KRSS president M D Nanjundaswamy, who spearheaded the attack on the Cargill office, asserts, "The Japanese are coming in the guise of imparting technical knowledge. That's how Thomas Roe came to India to establish the East India Company."

JICA's township offer was in response to an invitation from the Indian government, which was impressed by similar Japanese ventures in the Philippines, Malaysia and Indonesia. A model township committee with experts from both countries was set up and it short-listed besides Bidadi and Sathanur, New Noida in Uttar Pradesh and Gurgaon in Haryana.

JICA officials visited Karnataka three times in the past 10 months and received red-carpet treatment from the state government. But the KRSS and other environmentalist organisations set up road-blocks and demonstrated in protest. Reports that JICA officials will be coming to Bangalore in March to announce Bidadi and Sathanur as the township site sparked the latest round of demonstrations.

State government officials hail the township project as "revolutionary" and predict it will raise industrial performance to new heights. They rave also that "Japanese management ethos and quality consciousness" would permeate industry in the state and bring in more than US$ 3 billion in investments.

Bidadi MLA C M Lingappa attacked opponents of the township, saying, "These city hotheads do nothing in the interest of the villages. Once the farmers are convinced of the opportunities promised by the Japanese investment, they will welcome the foreigners with open arms."

The notion of "Japanese collaboration in Karnataka's development" is supported by all parties in the state legislature. Ramachandra Gowda of the opposition Bharatiya Janata Party, was quick to offer if "the government is scared to handle protests in the proposed sites, the people in my constituency will readily accept it." Janata Dal legislators, meanwhile, suggest the township should come up elsewhere in Bangalore district because its proposed location involves the loss of about 2,000 ha of irrigated land.
Opponents of the project received a fillip in January when dramatist and Magsaysay award-winner K V Subbana Rao brought the various protesting environmental and cultural organisations together under the banner of AJTF. Subbana Rao warns the township would reduce the "local population to mere onlookers.

The unprecedented publicity generated by the AJTF protest in mid-January has forced Karnataka chief minister Veerappa Moily to counter allegations that the state government has a poor rehabilitation record. Paradoxically, though maintaining the Union government had yet to take a final decision on the township proposal, Moily promised to hold discussions with farmers who may be affected by it. Soon after, Karnataka's minister for large- and medium-scale industries, Nagamma Keshavamurthy, announced all organisations opposed to the township proposal would be given a hearing, but she stressed Karnataka needs the township for economic growth and increased employment.