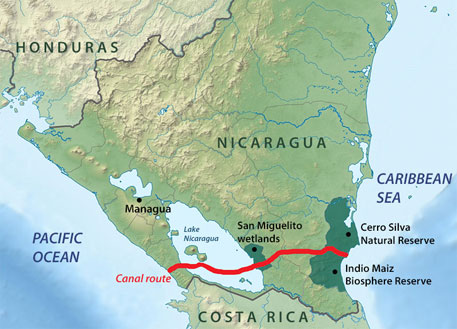 The much-debated inter-oceanic Nicaraguan canal, once completed, will exceed the Panama Canal—in both size and capacity. But the project undertaken by the Nicaraguan government, along with the Hong Kong Nicaragua Canal Development Company (HKND), is set to “cause massive ecological change”.

In a recently-released report, a group of international scientists have warned against the impacts of the proposed trans-isthmus shipping canal in the Central American country of Nicargua. The US $40-billion project will link the Atlantic and Pacific Ocean with a 278-kilometre long canal.

The report was released together by experts from Florida International University (FIU) and Southeast Environmental Research Center (SERC) in response to an assessment filed by Environmental Resources Management (ERM), the consulting firm for the project. In the findings, scientists have raised concerns like gaps in the Environmental and Social Impact Assessment (ESIA) and lack of public awareness.

Reports suggest that the canal is being built by the Chinese company to accommodate extra-large bulk cargo ships that aren’t commonly used yet. In December last year, Nicaraguan government began work on the proposed project that would divide Nicaragua’s biodiverse rainforests, coastal reefs, and the iconic Lake Nicaragua. According to the group of international scientists, the canal would traverse 105 km of Lake Nicaragua, which requires removal of about 1.2 billion tonnes of sediment from the lake bottom for initial construction (not including long-term maintenance dredging).“Its massive social, economic and environmental impacts will be suffered by Nicaragua and its neighbouring countries, and it seems, with the little information available, that those impacts have not been properly assessed,” said Henry Briceño, geologist and water quality expert at SERC and one of the authors of the study.

The damage that would be done to Central America’s largest lake is another bone of contention. For the project, silt sediments would be dredged in Lake Nicaragua for large shipping channels, and water from the lake would be used to operate the canal’s locks.

Earlier reports also suggest that the canal would cut through two UNESCO biosphere reserves that are home to jaguars, sea turtles, great green macaws and other endangered species.
Experts fear that the data that has been taken into consideration to study the currents and water availability in the lake is insufficient. Moreover, for a lake that is also a habitat for unique populations of marine life like sea turtles, an in-depth study is needed.

Uncontrolled deforestation of many areas within the lake’s large drainage is another threat. The activity has already caused significant erosion and sediment transport throughout the network of river channels entering the lake and the Caribbean coastal zone. “Plans for protecting areas of concern—both within and outside of the network of formal protected areas—in these associated watersheds are not yet developed,” says the report.

Though reforestation has been suggested as a mitigation strategy, the degree to which it can replace lost forest is unknown, and the methods used will depend on which species and ecosystem functions can be restored.

According to Briceño, the EIA for the project has been a secret so far. “We were allowed to see portions of a previous draft and we questioned its content.The EIA has been a secret so far. Nicaraguans and the whole world have been kept out. The government's strategy is silence and to push the project disregarding other considerations,” he adds in an email to Down To Earth.

Uncertainty also prevails over how the government would relocate the displaced. Todd Crowl, another co-author for the report agrees that very limited information on this project has been made public.