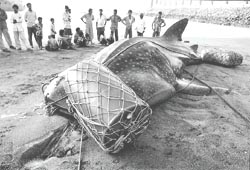 Whale sharks are slaughtered on a large-scale for their meat when they migrate during the summer months to the western coasts of India. This fact was highlighted in a documentary Shores of silence: whale sharks in India made by Mike Pandey, a filmmaker (see 'Blood on the beach', Down To Earth, Vol 9, No 10, October 15, 2000). "These sharks are killed for their meat that fetches high prices in Taiwan and other South Asian countries. My documentary is an appeal to stop their killing," said Pandey.

The documentary forced the ministry to enforce the ban. "Almost seven sharks are butchered everyday. Therefore, we felt the need to impose the ban to save the species," said Ashok Kumar, director of the Wildlife Trust of India. Before the documentary was released, officials believed that sharks did not migrate to the Indian coasts.