California bans the harmful use of mercury in vaccines 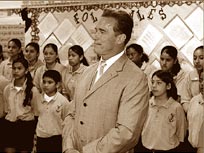 california has become the second state in the us to ban the use of toxic mercury in vaccines. The state governor, Arnold Schwarzenegger, signed a bill to that effect on September 28, 2004. According to the bill, children below the age of three and expectant mothers would not be given vaccines containing mercury -- a known neurotoxin. The law comes into effect from July 2, 2006. In May 2004, the state of Iowa had approved a similar bill.

Vaccines available worldwide contain a chemical called thiomersal that is added to increase their shelf-life and discourage growth of virus and bacteria. Thiomersal constitutes 50 per cent mercury. Vaccines containing the chemical have been implicated for an increase in cases of autism -- a brain disorder that begins during childhood and affects development of skills related to communication and creativity. During a June 2004 study conducted by the Columbia University, usa, when the chemical was given to mice, they showed autism-like behaviour because of brain damage. In the us, the chemical has been used since the 1940s. There has been a 273 per cent increase in the incidence of autism in California alone between 1987 and 1998. In 1999, in the wake of concerns about possible toxicity to children, the us Centers for Disease Control and Prevention recommended that vaccine makers should stop using thiomersal. But this suggestion was ignored, as vaccines without mercury are twice as costly as those that contain it.

Consumer groups have faced many problems in getting mercury banned from vaccines, as the industry stifled evidence of the link between thiomersal and autism. In May 2004, for instance, the Washington dc -based Institute of Medicine declared that there is no link between the preservative and autism.

The industry also stalled the state of Missouri from banning the use of mercury in vaccines -- the state senator, Ken Jacob, launched a filibuster that prevented the bill from coming into effect. Financial records of the state's election campaign show that Jacob received contributions from GlaxoSmithKline and from Novartis Pharmaceuticals. Both the companies manufacture vaccines that contain mercury.

The ban by California shows that the industry's devious endeavours may not succeed in the us and other developed nations. But in developing countries, the vaccine may continue to cripple children. In India, for instance, there is no effort to ban mercury in vaccines. "The situation here is worse than in the us, as the level of thiomersal in the multi-dose vials being sold by multinational companies in India is 10 times more than what is allowed in the West," says a Delhi-based paediatrician. The pretext -- mercury is a preservative and more needs to be added to Indian vaccines because of the country's climate.

"The government is only worried about vaccine coverage and is not bothered about the quality," asserts Ajay Gambhir, member of the national technical advisory committee on immunisation. This is alarming, especially considering that India is a mercury hotspot and adverse health impacts due to its careless dumping are quite common.