A noon meal food supplement consisting of a blue-green algae was provided to schoolchildren on a trial basis in Pudukottai district, with dramatic results in terms of weight gain and resistance to ailments. 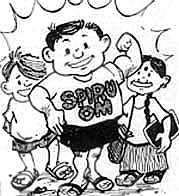 CREEPY, CRAWLY strands are not looked upon with gusto by children, however hungry. And, it took loads of icing sugar to make a test food supplement palatable to about 5,000 primary schoolchildren. They were fed high-protein spirulina algae as part of the noon meal in a programme evolved by the Murugappa Chettiar Research Centre (MCRC), the company that developed the technology for growing and extracting the algae and is marketing it now through a subsidiary.

Using a Rs 13-lakh grant from the Department of Biotechnology, the feeding programme began last September in coordination with the district integrated child development scheme (ICDS) in the Thirumayam, Ponnamaravathi and Arimalam blocks. A daily dose of 1.5 gm of sugared spirulina algae, named Spiru-om by MCRC, was fed to the children, who gathered at 92 preselected ICDS centres. Explained MCRC technologist Valiammai Subramaniam, "Our project target was restricted to 5,000 children (aged between 2 and 5), who were monitored by medical teams."

Medical monitoring over the past year shows encouraging results. Subramaniam said the spirulina-fed children's average weight gain is 1.5 kg and there has been noticeable resistance among them to dysentery, cold and fever and a reduction in the incidence of conjunctivitis and mouth ulcers. Subramaniam estimated the cost of one feeding of Spiru-om per child -- determined by tests at 1.5 gm -- was between 45 and 48 paise.

MCRC assistant director Joseph Thomas explained his firm had been toying since the 1970s with the idea of using spirulina as a human feed supplement. About 65 per cent of spirulina, a blue-green, single-celled alga, consists of protein and other important nutrients such as vitamin B-12. In 1984, a commercial plant with 7.5 tonne annual production capacity was set up in Pudukottai.

Another offshoot of the spirulina technology is through a tie-up with a voluntary organisation called Nutrition on Wheels (NOW) that has resulted in generating some income for fisherfolk in Tamil Nadu through backyard cultivation of the alga. Said NOW's Saraswathy Gopalakrishnan, "With a total investment of Rs 5,000 per family, which we provide, a fisherwoman could sell 1.5 kg of dry spirulina a month and earn Rs 550."