Protein from buffalo blood has answer to infertility 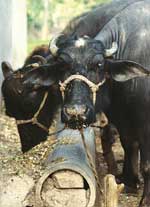 a protein isolated from buffalo blood induces forward motility of goat sperm, an essential quality that makes fertilisation possible in animals and humans, claims a research team from the Indian Institute of Chemical Biology, Kolkata. Known as the forward motility stimulating factor (fmsf), it has been shown to activate goat spermatozoa.

"fmsf can be used to enhance fertility in animal breeding farms and human infertility clinics," says Gopal Chandra Majumder, the lead author. "The motility-promoting efficacy of fmsf is higher than non-protein activators like theophylline and bicarbonate. Besides, it is not species specific," Majumder adds. fmsf, according to him, also has the potential for improving breeding of wild animals, and should help species that are almost extinct or endangered.

After isolation from buffalo blood fluid, fmsf was purified and exposed to goat sperm incubated in plasma. The team found two types of fmsf (fmsf-i, fmsf-ii). Nearly 20-30 per cent goat spermatozoa showed forward progression in the absence of fmsf-i. The addition of it enhanced sperm forward motility significantly.

"Study reveals that fmsf-i binds to the receptor protein on sperm cell surface, which activates a second messenger protein, which in turn triggers a cascade of cellular events inside the sperm, inducing forward motility," explains Majumder in a paper published in the November issue of Journal of Cellular Physiology (Vol 209, No 2).