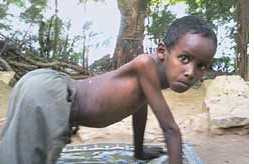 scientists may have found a new approach to muscular dystrophy, a fatal genetic disorder characterized by weakening of skeletal muscles. Not much is known about how the disease manifests itself. Recently, however, a team of French and German researchers found that a kind of muscular dystrophy is caused due to a lack of protein in the muscle cells.

The disease is caused by a mutation in a protein called capn 3 which plays a crucial role in a pathway that controls the production of another protein, called c-flip. It maintains muscle tissues and prevents apoptosis, or cell death. By targeting the cellular and molecular mechanisms responsible for creating the protein c-flip, scientists feel they may be able to develop new drugs to stop the wasting away of muscles.

Muscular dystrophy is classified into nine types. Children afflicted with the disease usually die when in their early 20s. Scientists at the University of Pittsburgh in Pennsylvania, us, have traced the cause to absence of a protein called dystrophin. Scientists are exploring gene therapy as an area of research.

India does not have information on the number of muscular dystrophy patients in the country. "We do not have any life support system for such patients. Although research is going on worldwide, there is no cure yet," Swatentar Bansal, founder of the Indian Association of Muscular Dystrophy, Patiala, told Down To Earth.