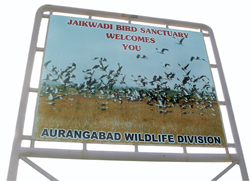 Over 50,000 people are agitating against a proposed declaration of the Jaikwadi Bird Sanctuary as an 'eco-sensitive area' under the National Wildlife Action Plan, 2004.

The protests turned violent on July 23, 2007, when the agitators attacked the office of the forest department, fearing that designating the sanctuary as an eco-sensitive area would imperil livelihoods. They have threatened to attack the sanctuary if the Maharashtra government goes ahead with its plans.

Its an ironical development considering that people in Paithan have so far lived in peace with the protected area. Located in Aurangabad district, Jaikwadi was notified as a sanctuary in 1986. It's biodiversity owes much to the Jaikwadi dam, the largest human made soil dam in Asia. Local people say the construction of the dam in 1974 led to a marked difference in the area's biodiversity."We found new species of birds each year at the dam's reservoir and decided to protect the area around it," says Vijay Diwan of Nisarg Mitra Mandal, a local ngo. Notifying the area as a sanctuary evoked little protest from people in the 118 villages within it since their livelihood was not affected.

The current protests started when Mukul Trivedi, deputy conservator (wildlife), Aurangabad, barred villagers from putting up a statue within the sanctuary. Tension built up when the government asked Trivedi to make proposals for eco-sensitive areas in five sanctuaries, including Jaikwadi (see box Eco-sensitive).

"I have sent notices to the water resources department for illegal lift irrigation projects on the dam site. I have also said that silt farming and fishing should stop. All these measures are to protect the bird sanctuary," Trivedi says. He, however, maintains that the move will not affect livelihoods.

Trivedi dismisses allegations that local people have not been consulted. He argues "It is not my job to inform and discuss issues with them. If they have objections they can meet me at Aurangabad to clear their doubts."
There is much that is conflicting in the local people's and the state government's understanding of an eco-sensitive area. The Union Ministry of Environment and Forests' directive outlines that the definition of eco-sensitive zones should be site-specific and that it should relate to 'regulation', rather than 'prohibition' of specific activities. It notes "State governments have to be consulted in this regard. This being with local communities; no enhancement of area should be done arbitrarily."

But people have not been consulted and unsurprisingly, they have developed fears about loss of livelihoods. Farmers are scared that they can't grow the main cash crop (sugar cane) but state government officials say they will be encouraged to grow vegetables in the dam area, instead.

"Jaikwadi dam is not a natural bird site. The basic purpose of the dam was to develop industry, irrigate the land and create employment for local people. If the government is going to ban fishing, silt farming and lift irrigation, we will go on an agitation. There are 27 fishing co-operatives with over 5,000 fisherfolk in the area. How will they sustain themselves?" asks Kailash Tawar, president of Shetkari Sanghatana, a farmers' association in the Marathawada region.

Dilip Yardi, member of the Board for Wildlife, Maharashtra, allays such fears. "We are not implementing the policy in a harsh manner. We are trying to protect the sanctuary and people's livelihoods," he says.

The wildlife lobby on its part alleges that local political parties are inciting people because it would impact their sugar mills adversely.