Protest against Shell in Canada 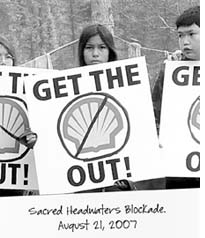 Indigenous protesters and environmental groups have taken their fight against a coal-bed methane exploration project in Canada to the British media. An advertisement decrying Royal Dutch Shell's plan to drill wells in the headwaters region of the Stikine, Nass and Skeena rivers was carried in European editions of the Financial Times on September 17. Eight environmental groups--Greenpeace, Friends of the Earth, the Sierra Club of Canada, Oil Change International, Forest Ethics, Earthworks, the Dogwood Initiative and Rivers Without Borders--paid us $19,477 for the one-time advertisement.

The headwaters area, known to the local Tahltan people as the Klappan, is home to a rich, year-round run of five indigenous salmon species and steelhead trout.

The advertisement explains the importance of the territory to those who live there, and invites readers to visit a website on the subject. Lisa Matthaus of Sierra Club said they would consider buying more space in the Financial Times and other newspapers if the first ad succeeds in getting its message to business readers, many of whom are Shell shareholders.