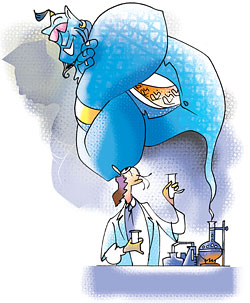 The Union Ministry of Science and Technology is forcing through a controversial act which seeks to regulate rights over government-funded research. Many feel that Public Funded R&D (Protection, Utilization and Regulation of Intellectual Property) Bill, 2007, will benefit the private sector more than the public.

The ministry feels the benefits of government-funded research are not reaching the public since scientists are not able to translate their work into products. While the bill puts the onus on researchers to commercialize their work, it ignores crucial reasons behind the works lying unutilized.

Most of the research taking place in government-funded institutions are irrelevant to industry and the public. For example, out of the 400 research works recently patented at the Delhi's Council of Scientific and Industrial Research, only 34 reached the public."Government research bodies do not understand what the public and the industry need," says Rajeswari Raina, senior fellow at the Centre for Policy Research in Delhi.

Moreover, industry does not have confidence in the research and the country lacks venture capital for product development.


The bill is modelled on the controversial Bayh-Dole Act in the us (also see 'Property wrongs' Down To Earth April 15, 2007). The bill drafted by the department of biotechnology (dbt) is likely to reach the parliament soon. Final draft of the bill has already raised hackles of the scientific community who say that bill will not bring research to the public domain. They also question the transparency in drafting the bill.

The bill is not yet open for a public debate. dbt says various ministries have been looking into the draft since April last year and it might come for a public scrutiny after the parliament approves it. "At some stage, the ministry should have placed it in the public domain," says Dinesh Abrol, a patent policies expert with the National Institute of Science Technology and Development, Delhi.

In the us, scientists and policy analysts have for long debated the features of Bayh-Dole. "Sans such a debate, a copycat bill will not serve the purpose in India," says Anand Patwardhan of Technology Information, Forecasting and Assessment Council of the department of science and technology.

The draft which Down To Earth managed to obtain shows the ministry has enough reasons to fear a public debate. It shows the public can hardly benefit from the bill. Instead it will fetch financial benefits to some scientists who have contacts in industry, and the acumen to commercialize their products. "It will make some scientists rich. But it will not do much public good," says N Raghuram, an expert on bioethics. Some scientists also suggest this approach of giving incentives to scientists who can sell their research to industry will further alienate science and technology from development since researchers may lose interest in working on technologies that contribute to development.

There are also fears that the bill will make public research available to private companies at a low cost. "Scientists will sell them for cheap and the corporate world will gain. This will not bring more money into research, as it claims," says P M Bhargava, former vice chairman of the National Knowledge Commission, the advisory body to the prime minister. Individual scientists will have less bargaining power than the government, he adds. dbt, however, differs "This will encourage innovation and hence will bring in more money through commercialization," says K K Tripati, one of the key authors of the draft.


The industry has welcomed the draft. "The sector will gain in terms of new technology while universities will get more money for research and the public will have more choices in technology and products," says Akash Taneja, executive director of the Institute of Intellectual Property Development at the Federation of Indian Chambers of Commerce and Industry in Delhi.


Those who drafted the bill seem to have had no idea of how the common people use and develop technology, says Raina. "Scientific policy makers in the government have no clue about grassroots innovations and technologies that can help the poor. Those who drafted the bill have not even heard about such innovations which are keys to public good," she adds. "The bill reads like a conversation within the government".

The National Innovations Foundation in Ahmedabad regularly records grassroots innovations in the country. In the recent past there were some excellent examples; a pen which the physically challenged can use with a single finger and a machine for spreading parboiled rice which is helpful to villagers who suffer from scalding of hands while spreading it for drying. The bill is silent on how such research will reach the public.

A large part of scientific innovations in India are taking place in small and medium scale enterprises (smes) which often use government fund for research. The bill says it will encourage smes, but inter alia (among many of its objectives). Many such companies use government funds for their research. Biswajit Dhar, at the Indian Institute of Foreign Trade says "Certain provisions in the draft even dissuade such innovations." (See table Wrong notes).


The new bill may also make it difficult for small enterprises to access technology by "fragmenting it," says Raghuram. Each technology consists of several patents often held by different researchers. With each scientist selling off his part of the research, smes will find it difficult to bargain. Only large companies can afford this, adds Raghuram.


In the current form, the bill leads to confusion since certain terms in the draft are vague. Dhar says "The definition of utilization does not match with the one in the patent act of 1970 and at times contradicts the latter." The draft is not clear on what will happen if such conflicts arise.

Raina says the bill does not address non-patentable research such as those for resource conservation technologies, effluent treatment and on climate change. The bill does also not talk about how to develop capabilities of industry, scientists and technology financiers. Industry is not mature enough in product development and there are few technology financiers in the country. "Bayh-Dole was no magic wand. Unlike in India, scientists in the us were already into technology development when the act came in. We have been into product development only for the last few years. We do not have early stage venture capital for technology development," says Patwardhan.

There are more incongruities. "The knowledge commission discussed the bill along with other issues to boost research. The commission which supported the bill ignored factors such as training scientists and lawyers on intellectual property rights," Bhargava says. dbt claims the bill deals with all the infrastructure and human resource development issues which might hinder its proper implementation. "We are training scientists on intellectual property rights," says Tripati.

Many in the industry too feel the time is conducive. "We already have venture capitals in technology development. Once the act is in, it will generate infrastructure," Taneja says. However, the bill does not mention measures such as setting up intellectual property cells to manage patent issues in the universities and recruitment of technology managers who can help scientists find markets for new technologies. Experts say the proposed legislation, which aims at making a handful of scientists rich, is not going to be a boon for scientific innovations in the country.