Company did not consult village council or obtain its consent as mandated by law for scheduled areas, complain residents 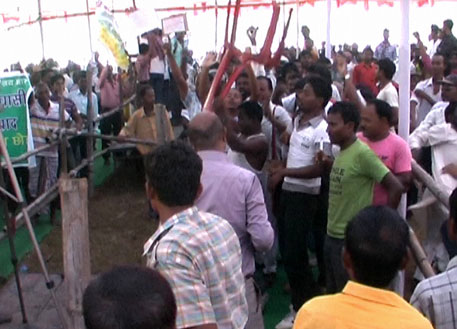 A public hearing held in East Singhbhum district of Jharkhand to clear way for a steel plant ended abruptly on September 24 following strong protests by people in the tribal dominated area. Loha nahin anaj chahiye (we want grains not iron), shouted the residents of Potka village while protesting against the proposed integrated steel plant of Bhushan Power and Steel Ltd.
Bhushan Steel has proposed the construction of an integrated steel plant of three million tonnes per annum (MTPA) production capacity and a 900 MW captive power plant in Potka. The total land required for the project is 1,390 hectares (ha) which is predominantly agricultural.

The public hearing continued for over two hours before the additional district magistrate, Ajit Shankar, ended it as protests mounted. “The hearing started off as a stage-managed event of an assembly of about 300 people brought in by the project proponents, restricting hundreds of unfavorable voices to outside the public hearing area,” said  journalist Kavi Kumar, who was at the venue of the hearing. But as the real project-affected people barged in, protesting loudly, they were confronted by the police and representatives of the project developer. Police resorted to mild lathi-charge to keep the situation under control. The village residents blocked the roads, declaring it to be a “janta (public) curfew”. 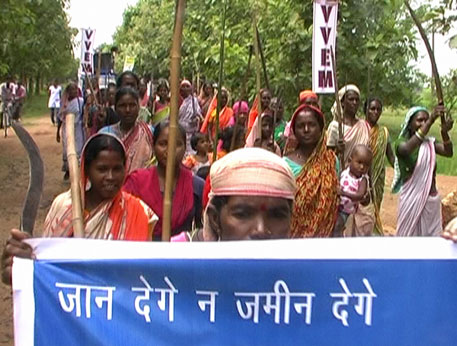 The district authorities, however, sought to project the public hearing as a success. “The hearing started peacefully with land holders and villagers participating; it turned into a chaos when outside people marched to the venue shouting, with clear intention of disrupting the event,” the additional district magistrate said.

The residents are mainly protesting the land acquisition for the project. The land under contention is an adivasi Schedule V area.  Schedule V areas cover tribal districts in nine states of India, and East Singbhum is one such district.  Any development in such area requires consultations with and consent of the gram sabha, as per the Panchayats (Extension to Scheduled Areas) Act (PESA) of 1996. “The project proponents did not go through such consultation process,” said Kumar Chand Mardi of Visthapan Virodhi Ekta Manch, an organisation that is spearheading the protest.

“The public hearing was more of a formality and we did not let the company and the officials have their way. As the protests mounted, the company and local officials left the place in haste with police protection,” he added. Other concerns raised by residents related to pollution from the proposed steel plant and problems arising from residents losing their agricultural land and means of living.