Will National Green Tribunal accept the second public hearing; it had dismissed the first one held five years ago as a ‘farce’ 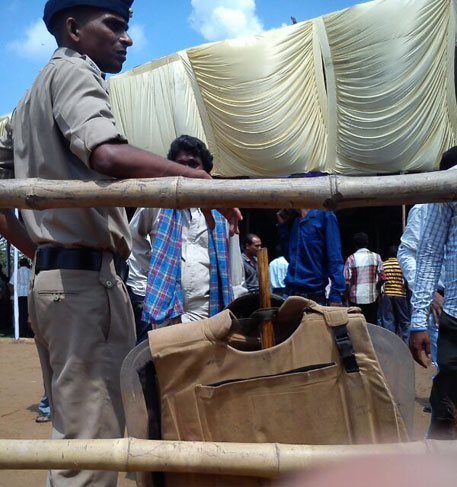 The sight appeared like a prison camp. People were herded like cattle into small square bamboo enclosures and were surrounded by gun- and baton- wielding policepersons.

The heavy security at the second public hearing of Jindal Steel and Power Limited (JSPL) at Tihli Rampur in Raigarh district of Chhattisgarh instilled a sense of fear. Around 4,000 village residents had gathered to decide the fate of four million tonnes per annum (MTPA) open cast and underground coal mining and coal washery spread over 381.42 hectares. The project will affect Gare, Lamardaha, Karwahi and Tihli Rampur village. Gare village will be completely wiped out.

People had burst into angry protests at the first public hearing. Scores of residents were injured in the ensuing lathi-charge by police.

The second hearing was held around at Tihli Rampur village nine km from the actual project site, Gare village. The proceedings stretched till 10.00 pm with sporadic bursts of fist fights and temper outbursts.

In the second hearing the arguments and contentions of people were no different from that at the first public hearing.

The venue of the hearing this time was nearly eight km away from Gare village. Some of the activists said this hearing, too, would be rejected by NGT. Activists who had attended the first public hearing made it a point not to miss the second one either.

Clad in a white dhoti, Radhe Shyam, stood in queue for nearly three hours before he took the microphone and pleaded with the observer, Amitabj Jain, chief secretary for forest, industries and commerce, to lodge an FIR against Navin Jindal, Congress MP and owner of the Jindal company. Jain was flanked by additional collector Shyam Ghabre and John Lakra, regional officer of Chattisgarh environment department.

“Jindals injured scores of people in the first public hearing in 2008. 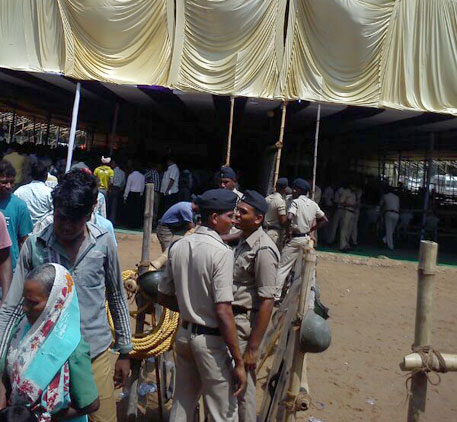 Five years later they have polluted the Kelo River. We do not need Jindals and their polluting projects,” he said.

Later, while talking to Down To Earth, Radhe Shyam said, the project coal block number is IV/6 and the hearing is rigged. “Next time I will come with a stick and a brick,” he said.

Another activist Sudhir Bera asked the observers why the hearing was not held in Gera village, the project site that would be completely uprooted because of coal mining. He termed the public hearing illegal.

“Do let us know when you will conduct the third public hearing,” he told the observers.

What muted the protests

Raghuvir Pradhan, coordinator of advocacy group Ekta Parishad claimed that in the past five years, Jindals have built a school, a hospital and an ITI college in the area.

“These sops were given to villages under CSR. These infrastructure projects mellowed the protests against the JSPL project. Jindals also deployed middlemen to purchase voices of people,” he alleged.

At the public hearing, activist Gauri Shankar Gupta took on the village residents supporting the Jindal project and observers by asking: “do we need schools and hospitals as a criteria for supporting a corporate project?”.

“Schools, roads, hospitals and colleges are responsibility of government. Those supporting the JSPL project because of these infrastructure projects are misled,” he said.

He told the observers that if CSR activities are the criteria for sanctioning a project, then there is no place for ministers and bureaucrats in this democracy. “Do we need corporate for development of the state?” he asked.

Speaking for nearly ten minutes, he also said that in the past five years the Jindals have misled people with their CSR activities. “CSR is a welfare move not a criterion for changing public opinion,” he asserted.

In the past five years, violence against the activists and residents opposing JSPL project dampened the morale of people. Ramesh Aggrawala, an activist, was shot. There were speculations that Aggarwala would attend the public hearing on a wheel chair. Still nursing his wound, the activist sent a written letter of protest to the observers. “I could not attend the hearing because of my ailing health,” he told Down To Earth.

The absence of such activists from the hearing weakened the protests.

Guman Singh of non-profit Mines Minerals and People pointed out that environment clearance to JSPL completely ignores the issue of pollution.

He said, nearly 5,386 trucks would be needed to transport coal from the mining site. “Where is the measure to control the air pollution?” he aked.

Singh also pointed out that Jindals are involved in the coalgate scam, and have been named in the Comptroller and Auditor General’s report. He warned the observers that they are conducting a public hearing for a company that is involved in a major scam.

Rajesh Tripathy, coordinator of non-profit Jan Chetna left the observersred-faced by asking what percentage of the village residents can read and understand English. “Why was EIA report in English not translated into Hindi and distributed to residents? Are they aware of environmental risks?” he asked.

He further elaborated that it’s the duty of local district administration to explain the EIA report and environmental risks involved in coal mining to village residents in local language.

Tripathi added that this proposed coal block is spreading a lot of darkness instead of dispelling it.