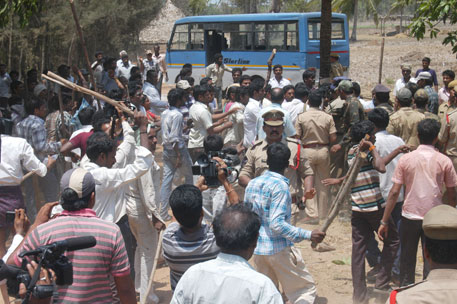 A public hearing for a proposed calcined petroleum coke plant at Chaatametta village in Andhra Pradesh’s Visakhapatnam district turned violent when local farmers and fisher people clashed with the police after they tried to obstruct the hearing. Some policemen and about 40 villagers received minor injuries in the melee. The hearing was organized by the Andhra Pradesh Pollution Control Board on June 6.

Petroleum coke or pet coke is a product of coker units of oil refineries and is used for making anodes for the steel and aluminium smelting industry. Local people are opposing the plant proposed by Sunvira Industries, saying it would greatly damage the environment and render the area uninhabitable. More than 20 villages in the neighbourhood would be affected by the pollution from the plant, residents allege.

Protests began early in the morning when area residents, armed with sticks, gathered at Seetampalem, a village about four km from Chaatametta, to prevent the revenue, district and pollution control board officials from entering the venue of hearing. A scuffle broke out when the police and officials tried to make their way through the crowd. The villagers took out sticks and pushed the police back. Officials asked the villagers to attend the public hearing and express their views at the meeting. But the villagers refused to budge, saying that if they attend the hearing, it would be considered as giving consent to the plant. This has happened many times in the past even when there was strong resistance from villagers during public hearings for many other projects, they argued.

When the police tried to disperse the crowd, the villagers retaliated by breaking the windscreen of two police jeeps.

Despite strong opposition from people, authorities decided to go ahead with the public hearing. D V Reddy, joint collector in-charge, who managed to reach the venue at Chaatametta by crossing the fields in his jeep, started the public hearing, and the crowd moved to the venue. Leaders of fisher people and farmers, civil society organisations, and a few political parties, like CPI(M) and Telugu Desam Party, expressed their reservations about the plant while a few people supported the setting up of the pet coke plant.

The Rs 330 crore plant will have a production capacity of 460,000 tonnes  a year with co-generation of 25 MW power. Residents say the plant would affect their livelihood.“During the production of petroleum coke, the plant would release traces of mercury, lead and other pollutants besides sulphur dioxide, causing severe pollution and health problems. But the environment impact assessment (EIA) report for the project is vague on the release of highly polluting gases and other chemicals,” says K Babu Rao of Movement for People Centered Development. Residents also fear that waste water from the plant would contaminate their fields and water bodies. The company is silent about the availability of raw material green coke for the plant, says Babu Rao.

The company management claims that the plant is energy efficient and an environment-friendly method will be adopted. The raw material—green petroleum coke or anode grade coke with low metal content—will not be totally burnt, but only densified, plant officials say. The furnace to be erected is the shaft kiln variety, while 25 MW power plant would be a heat recovery-based co-generation plant, says P Patanjali, general manager of the Sunvira. According to him, the the lead and mercury traces in the gases to be let out would be negligible and the entire waste water generated by the plant would be used within the plant and no waste water would be let out.