Plant site is on wetland surrounded by shrimp farms 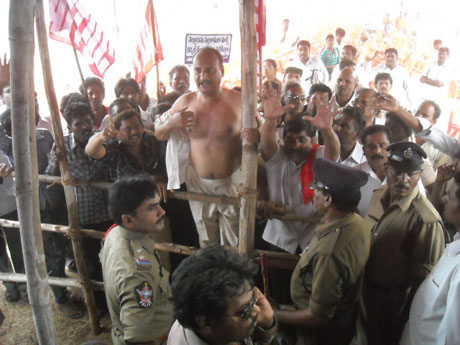 The public hearing for the proposed thermal power plant at Ankulapaturu village of Nellore district in Andhra Pradesh, held on October 3, turned violent.  In the melee, Vijayakumar, a practicing doctor and activist of Jana Vigyana Vedika, a people’s science organisation, was brutally beaten up by the police. An attempt to murder case has been registered against the circle inspector Ram Babu under section 307 of IPC.

The 350 MW coal-fired thermal power plant is being built by VSF Projects Private Ltd (VSFPL). The plant is one of the 29 proposed coal-based power plants that will cluster the coastal area of Nellore district. All sites are within a radius of 10-20 km from Krishnapatnam Port, India’s biggest privately-owned port which became operational in 2008. Eight of these projects have already received environmental clearance from the Union environment ministry. The remaining 21 projects, including that of VSFPL, are in different stages of getting sanctions. The total capacity of all the plants is 34,000 MW.

The ten villages surrounding the VSFPL site are backward. Most of the families here are landless Scheduled Tribe (ST) or small farmers belonging to Scheduled Caste (SC) and Other Backward Classes (OBC). The site is in the middle of a wetland surrounded by shrimp farms. Close to the site is a large tank spread over about 810 hectares (ha). Residents depend on this tank for their water needs. It provides means of living to many fisher families. Further, there are reserve forests and protected forests within 10 km radius of the site.

“But the environmental impact assessment (EIA) prepared by the company suppresses all these facts,” says Ramanaiah, convenor of Thermal Kalushya Vythireka Poratta Committee, citizen front protesting thermal power plants. There will be significant quantities of carbon dioxide, sulphur dioxide, mercury, arsenic, zinc and other pollutants released from the plants. “This will not only contaminate land, water and air, but also cause short-term and long-term health problems, including chronic obstructive pulmonary disease (COPD), bronchial asthma, lung cancer, neuro disorders, abortions and physical deformities,” he adds.

Company authorities deny such possibilities. According to B Narayana Murthy, managing director, the project is not a conventional coal-fired boiler. “Our project is based on super critical technology where emissions of carbon dioxide other pollutants will be considerably low,” he claims in a press statement.

On the day of the public hearing, police forces were sent to the nearby villages. They intimidated the residents and blocked way for tractors in which they were travelling, claim activists and residents. “About 700 people from the villages participated in the hearing and most of us walked seven to eight kilometres since the tractors were stopped by policemen,” says Balaiah, a local dalit leader.

During the public hearing, which was presided over by the joint collector and attended by Andhra Pradesh Pollution Control Board officials, only 20-30 people from the villages who were allegedly hired by the company were allowed to speak. “But the people, who walked all the way to venue braving the intimidation of police were not,”says Vijayakumar. There he asked the people to raise their hands, if they are against the project. “All people except those brought by the company raised their hands,” he adds.

In the subsequent melee, police started lathicharging. Vijayakumar was attacked by the goons of the company. “The circle inspector started strangling my neck. I would have been killed at the spot had the people not rescued me,” recalls Vijayakumar. Activists and residents are not sure whether the public hearing was over or will be held again.

There has been strong public resistance against coal-based thermal power plants coming up as a cluster in a small area. In a letter written to the principal secretary of the Department of Infrastructure and Investment last year, the district collector, K Ram Gopal had pointed out that “this is unique as nowhere in the country there is such a concentration of thermal power projects, and resultant impact on environment is causing concern among the public.”

Even from the point of view of power planning, such large number of coal-based projects do not make a sense as the demand pattern of Andhra Pradesh would not be able to absorb it fully, he says. “Each one of these projects will become a millstone around the neck of the state, not the politicians who are behind these projects, but the unwary people will be at the receiving end,” Sarma points out.