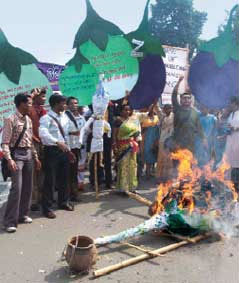 The  past fortnight was a busy one for those tracking Bt brinjal.

Union minister of state for environment, Jairam Ramesh, held public consultations in three cities to garner support for Bt brinjal even as Union agriculture minister asserted the approval by the Genetic Engineering Approval Committee (geac) for commercial cultivation of the genetically modified crop in October 2009 was final.

The Supreme Court has, meanwhile, asked the government to give details of the steps it has taken to protect indigenous varieties of brinjal during field trials.

Agriculture minister Sharad Pawar’s public statement on the clearance of Bt brinjal provoked Ramesh to shoot a letter to the senior minister saying such decisions have to be taken in a transparent manner.

At the national consultations, Ramesh had to contend with irate farmers, activists and scientists who questioned the need to introduce Bt brinjal.


The meetings were held in Kolkata, Bhubaneswar and Ahmedabad. Four more meetings are scheduled in other cities. The meeting in Kolkata was marred by protests. “Bt brinjal will not only harm the environment, but also rob the farmers of their living as they will have to depend on seeds imported by multinationals,” agricultural scientist Anupam Pal told the minister. A pro-GM scientist said Bt brinjal would control pest attacks but another scientist countered him saying the findings of the Bidhan Chandra Krishi Viswavidyala at Kalyani in West Bengal, cited by geac while approving the crop, are incomplete and not properly done.

Some farmers supported Bt brinjal. “We are not concerned with environmental problems but want the crop that would yield us profit; Bt brinjal can do that,” said Basishta Mandal, a farmer associated with the field trials by Monsanto-Mahyco, the promoter of Bt brinjal. Ramesh said he would take a decision only after completing the public consultations.

While addressing the public in Bhubaneswar, Ramesh said Bihar chief minister Nitish Kumar and the Orissa agriculture minister had said “no” to the commercial cultivation of Bt brinjal (Karnataka and Andhra Pradesh have also rejected it). Ratnakar Sahoo, a farmer from Orissa, presented the minister with organic brinjal and said: “I have been cultivating this for the past several decades without any pest problem.” Another farmer chided the minister for promoting Bt brinjal instead of addressing irrigation problems.

At the public meeting in Ahmedabad, 18 of the 28 farmers and 13 out of 15 scientists rejected genetically modified brinjal.

Down To Earth team