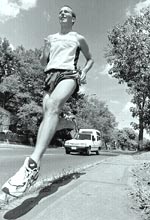 exercises and air pollution are a bad combination for those suffering from heart diseases, according to the first study of its kind. Although many researchers have reported an association between pollution and damage to heart, the study is the first to analyse the strain on heart muscles resulting from an exposure to air pollution. It shows that ischemia (decreased oxygen supply to heart muscle) is associated with particulate air pollution.

The study was conducted by researchers from Finland-based National Public Health Institute. During the study, the researchers found that heart disease patients are three times more likely to have ischemia while doing exercises after being exposed to high levels of air pollution than when they are not exposed to pollution. The findings are based on extensive observation of 45 subjects having a history of coronary artery disease. The subjects participated in biweekly clinical tests for six months, with each tests consisting of an exercise session followed by a six-minute electrocardiogramme (ecg). The goal of each exercise session was to achieve a heart rate of 90-100 beats per minute. Researchers analysed the data from 342 of the 417 exercise tests conducted. Among the 45 subjects they recorded 72 instances of exercise-induced st segment depression, which is measured by ecg and is associated with ischemia. At least 23 patients experienced exercise-associated symptoms when exposure to air pollution was high two days before a clinic visit. The remaining 22 subjects either had no episodes of ischemia or had episodes at every visit regardless of air quality. "The association between increased risk for st segment depression occurred among the subjects after periods of increased exposure to fine and ultra-fine particles in the air," says Juha Pekkane, the lead researcher. Fine particles -- those smaller than 2.5 micrometres and ultra-fine particles having a diameter of less than 0.1 micrometre were found to increase the risk of st segment depression by about three-fold on an average.

"The study highlights ischemia as a significant potential mechanism responsible for adverse cardiac outcomes associated with poor air quality," says Richard L Verrier, an associate professor of medicine at Harvard Medical School Boston. Verrier says the link between air quality and heart disease is more subtle than the one between pollution and respiratory ailments such as asthma.

The findings reveal the importance of avoiding outdoor exercise on hazy days. According to the researchers, a better option is to exercise in air-conditioned settings. Critics say that the study is focussed on patients with known heart disease. According to them, it is important to know whether other people are also susceptible.