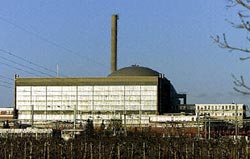 On Friday, November 14, 2003 Germany switched off the first of its 19 nuclear power stations, at Stade near Hamburg. The move was part of a deal the centre-left government had struck with industry in 2000: to close all nuclear power plants by 2025. It was also politically astute -- in 1998, Germany's Green Party had made such a phase-out a condition for forming a coalition with Chancellor Gerhard Schroeder's Social Democratic Party (spd).

"No country is pulling out [of atomic energy] as quickly as Germany," said Greens environment minister Juergen Trittin, adding that on average, one such plant would be closed every year. But opposition parties have threatened to reverse the withdrawal. Indeed, within government, Trittin is at odds with spd Economy Minister Wolfgang Clement over how much to promote renewable energy, as coal subsidies are phased out in Germany's search for alternatives to the nuclear shortfall.