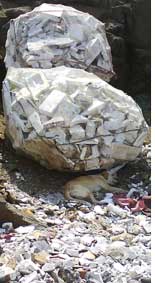 Because it sends its garbage to pollute a nearby village

SINCE 1983, all the municipal garbage from the city of Pune in Maharashtra has travelled 12 km to be dumped in the village of Urali-Devachi. More than 1,000 tonnes each day. Spread across 43 hectares, the dump pollutes the area. Leachates contaminate the groundwater, rendering it unfit for drinking, bathing or irrigation. The air is thick with smoke from burning garbage. The residents of the village took the Pune Municipal Corporation to the high court, complaining it violated garbage management rules.

A group of researchers decided to study the seriousness of the complaints. In a article in the journal Current Science (25 September), they claimed the village faces a toxic time bomb if the municipality continues to dump here. They found a high degree of contamination, with smoke and dust created from the burning of solid waste. "The leachate from the landfill has changed the characteristics of groundwater," said Amar M Dhere of Indira College of Commerce and Science in Pune, one of the authors. The team collected samples of leachate and groundwater in 2004-05.

They also collected air samples and measured the levels of certain key pollutants: spm (suspended particulate matter), so2 (sulphur dioxide), and nox (oxides of nitrogen). They found the annual average emission of spm was 1,708 microgramme per cubic metre (g/cum). The Central Pollution Control Board has set the standard at 360 g/cum. They found the annual average so2 level was 285 g/cum and nox was 234 g/cum. For both these pollutants, the standard is 80 g/cum.

The air quality worsened during April-June because of an increase in decomposition of organic garbage, leading to continuous fire and smoke. For analyzing the groundwater quality, the scientists collected samples from village wells. The well water samples were acidic and corrosive in nature and contained high level of solids and minerals. Sodium levels were high, too, indicating soil salinity.

The scientists suggest community-based waste management built around segregation of domestic, commercial, and organic waste. Suresh Jagtap, Pune's deputy municipal commissioner, said: "We have started segregation of solid waste in Urali-Devachi. We have already received a grant of Rs 24 crore from the Union government for ensuring the organic wastes are treated."