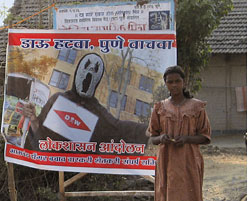 the Maharashtra government has given away about 40 hectares (ha) of grazing land to Dow Chemicals for a research and development facility in Shendi village, 30 km from Pune. Villagers say they were kept in the dark about the Rs 400-crore facility and their dairy business suffered huge losses. Activists say there is no environmental impact assessment report for the project.

Based on Right To Information documents obtained from Maharashtra Pollution Control Board, a Pune-based organization has found that Dow has been given consent to use 20 chemicals, listed as hazardous (in the Schedule I of the manufacture, storage and import of hazardous chemical rules) under the Environment Protection Act, 1980.

Over 10 villages in Khed taluka of Pune district have launched large-scale protests to save their grazing land. They are not allowing construction material into their villages.The situation took an ugly turn in late February when the state forcibly tried to send two trucks of cement and one truck of steel, along with three truckloads of reserve police. Villagers dug out the approach road, and over 130 of them were arrested on February 28. Other villagers did not allow the police to leave and cut the water and food supply to Dow's workers at the site. To avert any untoward incident, the police released the arrested villagers the next day. Despite the state's assurance that the situation is under control, the tension is palpable. "We are not scared and are ready to get arrested again," says Shantaram Maruti Panmand, former sarpanch of Shendi.

The village's dairy business has suffered losses worth Rs 8-10 lakh in the past six months. "We used to send 5,000 litres of milk in a truck but barely manage to send a tempo a day," says Kishan Kendre, a Shendi resident. "Each family has 10-20 cattle and earned Rs 10,000 per month from the dairy business. We are now forced to buy fodder worth Rs 9,000 per month. I have been forced to sell 20 buffaloes," Kendre adds.

Residents allege they were not consulted. "Of the 65 ha of grazing land, the Maharashtra Industrial Development Corporation (midc) had encroached on about 40 ha, which it has given to Dow; without the gram sabha's permission," says Panmand.

Until December 2007, when construction was going on full scale, villagers say they had no clue about the facility. "In December we heard Dow was setting up a research unit near Pune. We wondered if the factory coming up in our village was the same; there was no board put up. We found then that it was Dow's centre. A gram sabha meeting was called and a resolution was passed against the facility," says Panmand.

But their resolution is not legal, says P K Deshmukh, Pune's collector. "Grazing land is government land and it has been rightly and legally transferred by the revenue department to the industrial department; and legally notified. midc has allocated the land to Dow. The law does not require the permission of the gram sabha or panchayat," he says.

Activists support the villagers. "Dow claims midc has given it the land. But land revenue records as of January 10, 2008, show the 40 ha is under the village panchayat. In spite of all the talk of empowering panchayats in the country, officials still have such draconian powers," says Neeraj Jain of the 'Remove Dow, Save Pune Movement' against the proposed facility.

The state government had signed a memorandum of understanding with the company on October 31, 2007. After protests began, the state set up a high powered committee in early February to look into Dow's proposal. The committee is expected to submit a report soon. Villagers maintain they are still being kept out of the loop.

"The committee held meetings on February 14 and 25. We raised a lot of questions but the collector could answer none. We demanded the project report but we were told it was confidential," says Ankush Baburao Ganwat, a villager who was arrested recently. Villagers are planning a chargesheet against the company. "On March 16, a people's court, headed by two retired justice of the Bombay High Court, has been planned in Pune where a chargesheet will be issued. This will be followed by a protest march from Dehu village to the plant site on March 23," says Jain.

Despite such protests, it seems the Indian government, while eyeing Dow's proposed investment programmes, may be helping Dow not to pay the Rs 100 crore liability for remediation of the Union Carbide factory site in Bhopal (see box Saving Dow?).