Punjab slips for sand mine, again

A HIGH court ban has done little to curb illegal sand mining in Punjab’s Ropar district. Worse, the district administration has now drafted a plan to take control of illegal mining sites and lease them out for legal mining, much to the dismay of residents. Situated on the banks of the Satluj, Ropar is the state’s most affected district by illegal mining.

A reply to an RTI application received in June end shows that since March Punjab Pollution Control Board (PPCB), along with the district administration, state’s mining department and other stakeholders, has conducted public hearings in 22 villages for the mining of minor minerals like sand and stones. The area for which public hearings were conducted is 776 hectares (ha), while the district administration allows mining minor minerals only in 30 ha. “It clearly indicates that the state government is going to take over all the illegal sites,” says activist Dinesh Chadha from Ropar, who had filed the RTI application. Sand mining in the riverbed increases the risk of floods, and disrupts the groundwater cycle during the dry season. When contacted, the mining department said PPCB and the Union environment ministry have not yet given clearance for the sites in 776 ha.

According to the minutes of the public hearings, residents are not happy with the administration’s plan. They say the authorities have failed to check rampant illegal sand mining in their villages over the past two years. 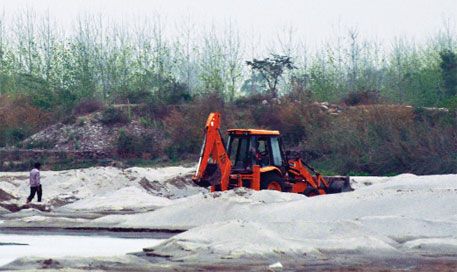 Bela Ramgarh is one of the villages where public hearing under the Environmental Impact Assessment (EIA) notification of 2006 was conducted in March. Sarpanch Gurdeep Singh is shocked by the administration’s plan to start mining in his village. It was due to his petition that in 2010 the Punjab and Haryana High Court banned sand mining in the two states.

Singh had challenged the state government, highlighting extensive damage caused to the rural commons by illegal mining. Despite the ban, rampant illegal mining was taking place, says Singh. “The mining mafia gave money to some people to silence them, while others were too weak to oppose,” he adds. After many complaints, the district collecter took action. “Dump drivers were arrested but mine owners still remained elusive,” says Singh (see ‘Sand slips’, Down To Earth, April 16-30, 2012).

To curb the crime, the government decided to expand the mining area and take over the sites where rampant illegal mining was going on, said a mining official on condition of anonymity. “There is a need for scientific mining in these areas to prevent any damage to the environment and people,” he adds.

The plan, in retrospect, does not look at the extent of illegal mining. Residents allege that EIA for the sites was conducted for the government with little public participation. “The consultant did not even speak to us while conducting EIA,” says Singh. The RTI reply shows only a fraction of the mining cost would be used to safeguard the environment (see ‘Mining plan for Ropar’).

While some villages were disappointed they would no more be able to mine sand for free, many were concerned about pollution. During a public hearing, when Iqbal Singh of Barhi Haveli asked if free sand would be available to the residents, PPCB said the state has no such policy. In Algran, the sarpanch complained of air pollution due to the movement of heavy vehicles for a nearby mining site. PPCB assured the dumpers would not carry more than 10 tonnes of mined material. Chadha says dumpers never carry less than 40 tonnes. “Since all mine leases will be given to private parties, it will be unprofitable for the miners and dumper drivers to carry less material,” he says.