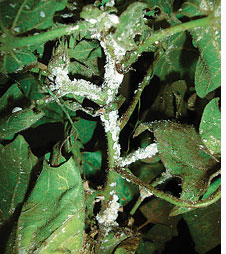 the Punjab government has stepped up measures to avert the occurrence of a mealy bug attack, which claimed 5-7 per cent cotton crops in 2007. The state government is worried because field officers from the Punjab Agriculture Department found traces of mealy bug in wheat in a few villages. Another reason for the department's fear is a study by the Stony Brook University, New York, which indicated that the bug may migrate from Pakistan to Gujarat via Punjab this season.

The cropping season for cotton begins in April and off-season precautions include killing the bug in this period. The pest's mobility is the least in winters since they hibernate in the soil and several host plants. They are also found on cotton sticks, which pile up after picking. "We have asked farmers to spray chemicals of carbamate and organophosphate groups once during the off-season. We have also asked them to burn cotton sticks in the fields where the attack was severe," says Ranjodh Singh Bains, agriculture development officer, Punjab Agriculture Department.

He also says the farmers have been advised to spray a chlorpyriphos when the sowing season begins. The agriculture department is also working with the public works department to ensure that all host plants along the roadside are uprooted and burnt.

Jowar is being recommended for field boundaries when the cotton season begins. "Jowar will prevent the mealy bug from spreading to the entire field. But intercropping of jowar and cotton is not recommended because it will reduce the land allocated to the main crop and impair physical activity between the fields," says Bains. Putting all apprehensions of bt and non- bt cotton to rest, Bains said there was no scientific proof yet that only Bt crop was attacked in 2007.