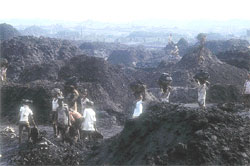 Damodar river is in deep water. Rampant mining in the North Karanpura coalfield spread over Hazaribagh, Ranchi and Palamau district of Jharkhand is contaminating the water body. A study has found high levels of lead, arsenic, iron, cobalt, chromium and manganese in the sediments and surface water of Damodar and Safi rivers. According to Nitish Priyadarshi, principal investigator, department of geology, Ranchi University, who conducted the study, the pollution is posing health problems. More than 30 samples were collected from rivers, wells, handpumps, mine water and analysed by the atomic absorption spectrophotometer method. Iron and zinc were above tolerance level in surface water. Arsenic was high in the water near mining area. High concentration of lead in the coal present in the region was also contributing to the contamination. The Central Coalfields Limited (ccl) has been mining here for decades. People living nearby, who use the river water for drinking and domestic purposes, are mostly hit. "They are suffering from skin diseases," said a ccl doctor. But P Kumar, ccl's superintending engineer (environment), denies any correlation between the diseases and river water.