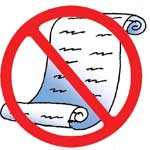 On the last day of 2009, a phrase died a quiet death. “Shovel ready” incessantly invoked by the Obama administration to sell its US$ 787 billion federal stimulus bill was included in a list titled ‘Be Banished from the Queen’s English for Mis-use, Over-use and General Uselessness’. The list is brought out every year in the US by the Lake Superior State University.

“Shovel ready” dug its own grave by forcing its way into speeches of the president and too many other politicians in past months, said Joe Grimm an editor at the Detroit Free Press. The exact age of the phrase isn’t known, but it had been quite a favourite in economic jargon for at least a decade—a fondness that led a utility company in New York to secure the shovelready.com website in the late 1990s.The phrase became a clarion call for the White House during the past year as shorthand for the kind of taxpayer-funded work projects that were ready to launch.


It didn’t help that some of the projects weren’t quite ready for a shovel.