Putting an end to guinea worms 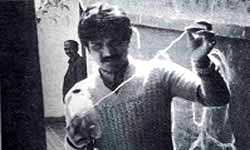 The dreaded guinea worm disease will be eradicated in India by 1995, claims UNICEF. UNICEF country representative for India Jon Eliot Rhode told newspersons the number of guinea worm cases have reduced drastically over the past decade. Figures provided by the National Institute of Communicable Diseases (NICD), the nodal agency for the Rs 70 lakh Guinea Worm Eradication Programme (GWEP), show corroborate Rhode's statement and decline in guinea worm cases from 40,000 in 1984 to 413 in August 1993. NICD director T Varghese predicted the disease would be eradicated from India by 1994.

The guinea worm is a nematode parasite. The adult female can grow as long as 120 cm in the connective tissue beneath the human host's skin, causing ulceration, swelling and pain. It releases its larvae by causing large blisters on the host's limbs. When the host comes in contact with water, the larvae escape into water, where they are eaten by water fleas. The larvae thrive inside the fleas and infect anyone who consumes water containing the fleas. Varghese says, "Village communities should ensure contaminated water is not consumed and inform the authorities as soon as the disease is diagnosed."

GWEP is focussing on the three worst-affected states -- Rajasthan, Madhya Pradesh and Karnataka, from where 50 per cent, 43 per cent and 7 per cent, respectively, of the cases are reported. To help India meet the World Health Organization's eradication deadline of 1995, UNICEF is pitching in by ensuring clean water in villages that are covered by the programme.