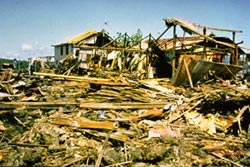 quakes can be triggered by tides, as per researchers from the us-based University of California. The tides are produced by the gravitational pull of the moon and sun on the earth, causing the ocean water to rise and fall periodically. This, in turn, raises and lowers the stress on the strata faults roughly twice a day.

The researchers scrutinised data pertaining to more than 2,000 earthquakes occurring worldwide between 1977 and 2000. In particular, they studied quakes originating in the subduction zones, where one tectonic plate collides under the other, such as near the coasts of Japan. "These earthquakes showed a strong correlation with the intense tide stress," the researchers state. They also found that strong tides invariably triggered earthquakes in areas with faults occurring at shallow depths.