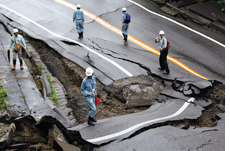 An earthquake measuring 6.8 on the richter scale hit Japan on July 16, causing widespread damage and a radioactive leak in one of the world's biggest nuclear plans. The first quake had its epicentre around 24 km from Kashiwazaki city in Niigata Prefecture and 240 km from Tokyo. A second, deeper quake struck 13 hours later around 330 km west of the earlier epicentre, but it caused no damage.

The earthquake killed nine people, injured more than 1,000 and damaged or destroyed more than 900 houses. Around 12,500 people had to be evacuated from their homes in Niigata. Kashiwazaki city was the hardest hit. The earthquake also tore up roads, caused landslides and left a train derailed at Kashiwazaki station.

Japan experiences about 20 per cent of the world's major earthquakes and has developed an infrastructure to deal with them, including an elaborate system of disaster alerts.But the recent earthquake raised an alarm after two leaks were reported from the Kashiwazaki-Kariwa nuclear plant in Niigata, situated just 9 km from the tremor's epicentre. Authorities are checking the possibility of a third leak.

A fire charred an electrical transformer in the plant, planks toppled into a pool of spent nuclear fuel and around 400 barrels of atomic waste fell over during the quake. Media reports say inspectors had identified four fault lines in the area while conducting a geological survey before the plant started in 1980, but had concluded that they were inactive.

The Tokyo Electric Power Co, which runs the plant, was criticised by Japanese prime minister Shinzo Abe for being slow to announce details about the damage at the nuclear plant. Criticism has also come from environmental groups. "You cannot have nuclear power without public trust," said Jan Beranek, nuclear energy project leader with Greenpeace. "And you cannot trust people who don't tell you the truth or who build nuclear plants in earthquake zones," he added.

Meanwhile, Japan's trade ministry has ordered the plant shut until its safety is assessed.