Will any of the 716 planets discovered outside the solar system be habitable? 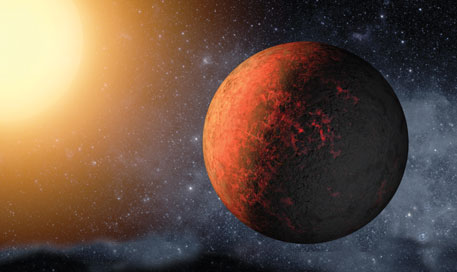 “THIS result on the background stars is the last cornerstone that makes me think we can go forward with planets Kepler-20-e and Kepler-20-f,” wrote an elated Francois Fressin, leader of the team which found the planets, in an email to his colleagues on August 2. It was a historical moment. Fressin had passed the final hurdles to confirm the presence of the earth-sized planets around a star not very different from Sun which he discovered almost a year ago.

Fressin is not alone. The quest to find exoplanets, planets outside the solar system, goes back 2,000 years. The first major breakthrough came in 1995 when Michel Mayor and Didier Queloz of University of Geneva confirmed an exoplanet around a fully developed star, 51 Pegasi. The discovery initiated a flurry of research into the field. As of December 22, 2011, the existence of 716 exoplanets has been confirmed. The latest one being Kepler 22b, an exoplanet 2.4 times the size of Earth discovered in the first week of December. This is the first exoplanet that NASA’s Kepler Mission, a massive project to hunt exoplanets, has found in a habitable zone of a Sun-like star, Kepler 22. The planet is 600 light years away from us. “It is the smallest yet found to orbit in the middle of the habitable zone of a star similar to our sun,” says a statement by NASA. A habitable zone is a region in a solar system where conditions are just right for the presence of liquid water, hence life. Before it, only two exoplanets—HD 85512 b and Gliese 581d—have been found to be potentially habitable.

How close to life?

“Probably the most important reason we look for other planets in other solar systems is to find someone else,” says Eric Loyd, an amateur astronomer. So, have we really got any closer to the goal? Kepler 22b, the planet which is only slightly bigger than Earth, seems to be the first hope. But scientists believe there’s still a long way to go. About the possibility of life on Kepler 22b, Fressin is not hopeful. “Kepler 22 b has 2.4 times the diameter of the Earth. It does not seem that much, but it means you could fit 13 times the Earth inside its volume,” says Fressin. The few known exoplanets with this size are sub-Neptunes, gaseous planets, where we don’t expect life, he adds. Fressin’s discoveries, Kepler 20-e and Kepler 20-f, are too hot and close to their star to be habitable. Their discovery was published online on December 20 in Nature.

Abel Mendez, associate professor of physics and astrobiology, University of Puerto Rico, maintains a repository of planets in habitable zones. He says, “Kepler-22 b did not pass our initial habitability assessments because its size suggested it is more like a mini-Neptune than an Earth-like planet.” However, we did some further analysis and it might be included soon,” he adds. HD 85512 b generated interest in September last year as it lies in the habitable zone of a star 36 light years away. However, scientists are yet to determine its atmosphere and surface. Similar questions need to be addressed for Glies 81d.

“We have a large number of candidates but each of them requires a scientists’ time and confirmation of telescopic observations,” says Fressin. Our goal is to find and confirm Earth-sized planets in the habitable zone, he adds.

Missions are the key players in the exoplanet hunting game. One of the biggest, and most successful is the Kepler mission, launched in 2009. It is stationed the farthest from Earth. “Kepler is a fantastic mission,” says Andrej Prsa, assistant professor of astronomy and astrophysics at Villanova University in the US. It provides data not only for the exoplanet community, but also for stellar astrophysics (study of stars and their evolution),” he adds.

But it is not the only one. The High Accuracy Radial velocity Planetary Search project (HARPS) headed by Geneva Observatory, Michel Mayor— the man who started it all in 1995—has a haul of 50 exoplanets to its credit as on September 2011, with 16 of them being Super-Earths. A Super-Earth is a planet that has a mass slightly higher than Earth, but much less compared to other gas giants like Jupiter and Saturn. Other exoplanet-hunting missions include COROT (led by France), MOST (Canadian). Launched in 2006, COROT also tracks planetary transits, and has added 26 new planets to the exoplanet catalogue. MOST, on the other hand, is a small telescope and its priority is studying stars.

The projects have added to our understanding of the universe, says Adam Burrows, professor of astrophysiscs at Princeton University in the US. “We are now learning about the various architectures like orbits, masses of planetary systems, the statistical prevalence of planets beyond the solar system around other stars, and the character of the atmospheres of some,” he adds.