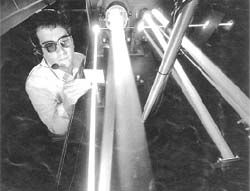 for fans of Star Trek and other science fiction stories, travel by spacecraft at speeds exceeding the speed of light is routine. But in the real world, the speed of light in vacuum (300,000 metres per second), sets the upper limit to the speed at which information can be transferred from one point to another. This is a central postulate of the theory of relativity that has proved to be enormously successful in explaining the physical world. Thus reports of experiments where scientists have broken this speed limit always provoke great interest. A team of Italian scientists has sent pulses of microwaves over one-metre distance at speeds that are 5-10 per cent faster than the speed of light ( Physical Review Letters , Vol 84, p4830).

The speed of light is not a constant but it changes from material to material. One of the manifestations of this phenomenon is the simple refraction of light. Light travels at different speeds in air and in glass leading to the bending of light by lenses. There is also no taboo on speeds faster than light. For instance, the point where the two hands of the scissors meet could travel at speeds faster than light when the hands themselves move at great speeds. Einstein's theory of relativity only forbids transmission of information at superluminal speeds. And there is a good reason for this.

In relativity, time is intricately linked with space. The way the theory is structured, time moves forward as if on a light beam. Thus if one were to move at speeds exceeding the speed of light, one would move backward in time. This is fine in science fiction, but could lead to all kinds of paradoxes in real life. For instance, what if one was to go back in time and murder one's grandmother?

For at least a couple of decades, scientists have been achieving speeds faster than light but in very special cases. The trick is that pulses moving over very short distances and through very thin barriers attain these speeds. These waves are really flitting waves and cannot carry any information.

Now physicist Anedio Ranfagni and colleagues at the Italian National Research Council in Firenze, Italy, have demonstrated a method for getting superluminal velocities in free space rather than through a barrier. The set up used by them is deceptively simple. The team sent microwaves (3.5 cm wavelength) from a conventional microwave antenna, through a narrow, ring-shaped opening onto a large, curved focusing mirror, which collimated the waves into a beam propagating back from the mirror, beyond and behind the source. The microwaves were modulated -- just like the radio waves that come to our radios are modulated -- with rectangular pulses. They then detected the pulses along the beam axis at distances ranging form 30 to 140 cm. From the distance and the time taken to reach the detector, they could find the speed at which the pulses travelled. To their surprise, they found that the speed at which the pulses travelled was about 5-7 per cent higher than the speed of light.

Though experimental; the set-up is straightforward, the analysis of the beam propagation is quite complex and thus many physicists are debating whether the team has really achieved superluminal speeds, as claimed. At least some scientists feel that it is really a geometric effect, much like the fulcrum of the scissors moving at apparent superluminal speeds. If this is true, than the experiment is only a technical achievement since the set-up is simple and can be easily replicated.

But if, as Rangagni claims, the data supports superluminal signal transmission, then causality and relativity will be in real trouble. Though the barrier of the speed of light in relativity is a postulate without any proof, most physicists are loath to give up causality, the sequential following of effect from the cause. In any case, more experiments and better data will decide if one of the central tenets of 20th century physics is about to be demolished or not.