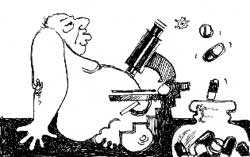 a protein has been found in the body's main weight-regulating system that could be targeted to develop obesity drugs. Gregory Barsh and his colleagues at Standford University School of Medicine, California, usa, have named the protein as aguoti-related protein ( agrp ).

In 1994, researchers had discovered leptin, a protein that is targeted to prevent obesity. Leptin is produced by fat cells as an indication that the body has sufficient energy stores. When laboratory mice are injected with high levels of leptin, they initially decrease their food intake, increase their metabolic rate and become much thinner. However, after a due course of time, their body adapts to high levels of leptin and becomes resistant to its effects. In such cases, the newly identified protein may prove to be an ideal target, says Barsh.

The researchers discovered agrp after receiving a clue from hairs of a yellow mouse. They were looking for proteins similar to agouti that are normally produced in skin. When a pulse of agouti alters pigment production in hair cells, the black hairs of a mouse get a tiny yellow stripe. The mouse looks brown from a distance.

When they isolated the mouse and human genes coding for agouti in 1992, they found that some mice with a mutation in this gene produced agouti continuously and throughout the body. This made the mutant mice both yellow and obese. While the colour of the mice were on expected lines, their obesity came as a surprise to the researchers.

They got a hint that a protein similar to agouti was being produced elsewhere in the body that was regulating weight. Then then started a search for a dna -sequence database and found that agrp is produced in the adrenal gland and the hypothalamus -- two factors that regulate weight.

When the researchers made transgentic mice that produce large amounts of agrp , the mice were found to be weightier than their normal mates as early as four weeks of age. An organism containing genetic material into which dna from an unrelated organism has been artificially introduced is called transgentic. Once the transgenic mice got matured, their weight was 70 to 100 per cent more than normal mice. Even their length and food intake was higher than normal. The researchers found that mice deficient in leptin produced eight times more agrp than normal. This suggests that leptin normally controls agrp by keeping its levels in check.