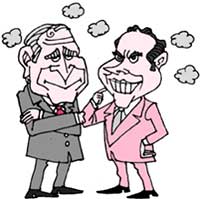 a much-hyped meeting between uk prime minister Tony Blair and us president George W Bush on June 7, 2005, in Washington, usa, once again revealed Bush's hard line on climate change. The meeting was projected by Blair as an attempt to persuade Bush to soften his stance on debt relief for Africa and decisive action on climate change. It drew increased significance due to its timing: just a few days before the g8 annual meeting, which has climate change as a key agenda item. But Blair's strategy of using his government's support for the us -led invasion on Iraq to win Bush's compliance failed. "In terms of climate change, I've always said it's a serious long-term issue that needs to be dealt with," Bush said, adding: "But many are pressing for restrictions too severe."

Blair also discussed climate change with a bipartisan group of senators. Towards the end of the hour-long meeting, senator Thomas R Carper told him he had the best chance of persuading Bush to embrace mandatory carbon dioxide emission cuts. "More than anyone sitting around this breakfast table, our president owes you a great deal," Carper said, adding: "I would not be shy about reminding him of that fact." But the plan didn't work. Individual g 8 members, except the us, have pledged to reduce their greenhouse gas (ghg) emissions under the Kyoto Protocol, a global treaty to fight climate change. This is why Blair, who currently heads the g 8, is 'publicly' trying to coax the us into adopting stricter controls.

Further highlighting the Bush administration's disregard for climate change, the Washington Post recently exposed the contents of a leaked document titled "Climate Change, Clean Energy and Sustainable Development", which will determine the action g 8 countries take to combat global warming. The papers reveal that the us has succeeded in weakening key sections of a proposal for joint action to curb climate change. Negotiators have agreed to delete text that would detail how rising temperatures are affecting the globe, set ambitious targets to cut carbon dioxide emissions, and set stricter environmental standards for World Bank-funded power projects. One deleted section, cited "increasingly compelling evidence of climate change, including rising ocean and atmospheric temperatures, retreating ice sheets and glaciers, rising sea levels, and changes to ecosystems".

This, however, is not a one-off incident. us officials have consistently sought to modify us government and international reports that endorse a more aggressive approach to fight global warming. In mid-June 2005, the New York Times reported that Phillip Cooney, chief of staff, White House Council on Environmental Quality, had edited government documents to emphasise the uncertainties surrounding the science on global warming. Cooney resigned from the administration shortly after the expos, to take a public relations job with oil giant Exxon Mobil Corp., a leading opponent of mandatory limits on ghg emissions.