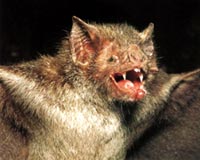 An unprecedented outbreak of rabies in a northeastern province of the Amazon basin has left 15 people dead around Portel, a sparsely populated region of Brazil. Seven cases were diagnosed by laboratory tests, and eight others showed similar symptoms after bat bites. The epidemic is believed to be a natural offshoot of reckless deforestation and consequent loss of habitat for vampire bats.

Brazil's National Institute of Space Research revealed that 25,476 sq km of Amazon rainforests were lost between 2001-2002. Consequently, it appeared that bats were turning to humans for nourishment. Meanwhile, local health authorities launched an intensive vaccination programme in the area.