Race against the rat 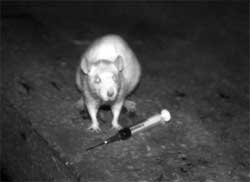 'beat the mouse' is the latest rat race. The competitors are cancer specialists who want to find out a cheaper, faster alternative to testing whether chemicals are carcinogenic. The only reliable method at the moment is to dose rats and mice with the chemicals and see if they develop tumours. But in this unusual contest, a few dozen researchers will try to match the performance of rodents and predict whether 30 chemicals will cause cancer in laboratory animals.

"Developing a new technique is easy, but knowing how it will deal with the wide world of unknown chemicals is a problem," says Doug Bristol, a chemist at the us National Institute of Environmental Health Sciences in North Carolina, which is running the competition. The rodent test requires dosing both sexes of rats and mice, for up to two years. The test is such a lengthy procedure that it has taken about three decades for about 400 compounds, with a current price tag of about us $2 million per compound. Due to this the growing backlog of other chemicals, many of which are already on the market, queued for evaluation, is probably in excess of 100,000, says Bristol.

Thirteen research groups from Britain, Italy, Japan, and the us have published their methods and predictions on the cancer-causing potential of 30 compounds. The methods vary largely. One team is relying on the logic and intuition of a panel of human toxicologists, another is using computer calculations of the electronic structure of the compounds. The technique of Clay Easterly of the Oak Ridge National Laboratory in Tennessee, who heads one of the competing groups, is based on how the compounds behave in a set of quick assays, such as their ability to mutate bacteria.

It will take about three years before all rodent tests are completed and the researchers can argue about which method is best. Even if such tests can never quite replace laboratory rodents, says Bristol, they may prove useful, for instance in weeding out compounds that clearly pose no carcinogenic threat. That alone will vastly streamline the screening procedure and save millions of dollars