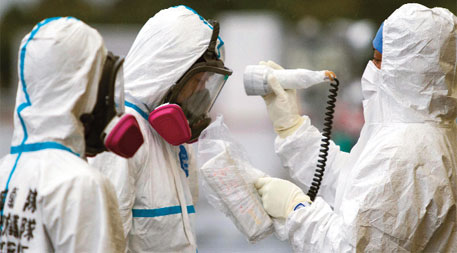 IN A world leaning towards nuclear energy, one of the greatest fears is of radioactive emergency caused by accident or a terrorist attack. Radiation exposure, or radiation sickness, can affect heart and lung function, and disrupt the nervous system and the digestive tract. White blood cell count falls sharply in irradiated people, reducing their immunity.

Existing therapies for radiation sickness, which include giving antibiotics, must begin within hours of exposure. These cannot be used in case of mass casualties or inadvertent exposure.

Scientists have now developed a therapy that works 24 hours after the exposure. It comprises a fluoroquinolone antibiotic (for instance, ciprofloxacin) and a synthetic version of an infection-fighting protein in humans, BPI (bactericidal/permeability-increasing protein). The protein acts by binding to molecules on the surface of bacterial cells, stopping cell growth and subsequently facilitates cell death by membrane degeneration. Radiation exposure decreases the level of the protein in the blood.

In their study, the team at the Dana Farber Cancer Institute and Children’s Hospital in Boston in the US exposed mice to radiation levels of seven grays (exposure from standard X-ray machine is 0.01 gray). This much exposure can kill 95 per cent of untreated mice. A day after the exposure, some mice were given the antibiotic while some were given the antibiotic-protein combo. About 40 per cent of the mice given the antibiotic were still alive after 30 days. The mice that received the combo had a much higher survival rate, to the tune of 80 per cent, and regained their ability to generate new blood cells quicker.

Ofer Levy, co-author of the study, says both the antibiotic and protein have been shown to be quite safe in humans.“Their combined effectiveness is an indication that they may be equally beneficial in people,” Levy adds. The study has been published in Science Translational Medicine on November 23.

B S Satish Rao, head of the division of radiobiology and toxicology at Manipal Life Sciences Center of Manipal University, says the double drug-therapy could be effective in case of a mass-casualty situation, like the Fukushima disaster in Japan in March 2011. “Presently, we do not have any such agent which can render effective mitigation against radiation toxicity in post-exposure scenario.” The favourable bioavailability and safety profile of the therapy make it more clinically acceptable. An added advantage is, the therapy may ease the suffering of cancer patients undergoing radiotherapy, he adds.