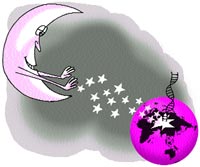 four billion years ago, the Moon orbited much closer to the Earth than it does now, causing massive tides to flow every few hours. These tides could have led to the evolution of early dna-like molecules. Richard Lathe of the uk-based organisation Pieta Research has recently propounded this hypothesis in the journal Icarus (Vol 168, No 1, March 2004). His premise could radically change the notions about life's genesis.

According to a popular theory for the origin of life, self-replicating molecules such as dna emerged when small precursor molecules in the 'primordial soup' formed long strands. These strands served as templates for more precursor molecules to attach along, creating double-stranded polymers similar to the dna.

But the theory is questioned, as it fails to explain how the double strands break apart -- a must for the molecule formation process to continue. Lathe is also unconvinced about the theory's viability.

To explain his theory, he took the help of pcr, a lab technique that can help make a trillion copies of a single dna molecule. During the process, dna is cycled between two temperatures in the presence of enzymes. At 50c, single dna strands act as agents for synthesising complementary strands. At 100c, the double strands break apart, doubling the number of molecules. As the temperature decreases, the synthesis starts again.

Lathe believes that something similar happened on Earth. With close proximity to the Moon leading to dramatic changes in Earth's coastal salinity levels, there were repeated associations and dissociations of double-stranded molecules similar to dna. When the massive tides rolled in, the salt concentration was very low. Double-stranded dna breaks apart under such conditions because electrically charged phosphate groups on each strand repel each other. But when the tides went out, precursor molecules and precipitated salt would have been present in high concentrations. This would have encouraged double-stranded molecules to form, since high salt concentrations neutralise dna's phosphate charges, allowing the strands to stick together.

These unrelenting saline cycles would have dramatically amplified levels of molecules like dna, which eventually led to the orgin of life, claims Lathe.