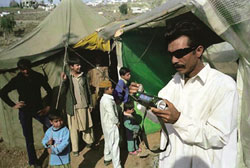 Radio programmes that target needs of quake survivors are becoming popular in displaced persons' camps in Pakistan-occupied Kashmir. Information updates on the government's ongoing compensation scheme to home-owners, as well as programmes on hygiene promotion and camp safety have become a big hit.

Following a donation by Internews, a media development ngo, the un High Commission for Refugees (unhcr) distributed 10,000 radio sets throughout the earthquake affected areas. The un refugee agency is also co-sponsoring a radio show called, Himmat Jawan Hai (Courage is supreme) with the Pakistan government's Earthquake Reconstruction and Rehabilitation Authority (erra) and Radio Power fm 99."Since many people living in the camps for the earthquake-affected are illiterate, they were not aware of the rehabilitation efforts," said Ilyas Javed, of unhcr. He hoped that matters will take a turn for the better now.