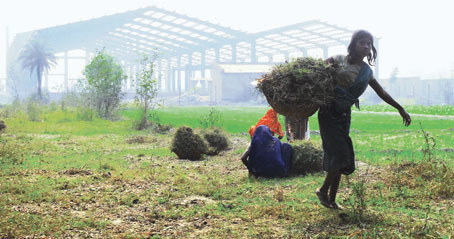 OUTRAGED by a series of lies by Utkal Asbestos Limited (UAL), residents of 15 villages in Bihar’s Vaishali district have demolished a part of the company’s upcoming asbestos plant and brought construction work to standstill. On December 16, about 1,200 people vandalised the plant and blocked all roads to the plant site in Rampur Rajdhari village for 11 hours. The blockade was lifted after the district administration asked the company to stop work till the issue was resolved.

With units in Odisha, Uttar Pradesh and West Bengal, UAL manufactures asbestos sheets under brand name Konark. People in Vaishali have been protesting against its upcoming plant since June 2011 alleging that UAL acquired land under false agreements and the environmental clearance granted to its plant was faulty. In 2010, UAL bought more than seven hectares from farmers in Chak Sultanpur and Rampur Rajdhari villages on the pretext of setting up an agromedicine plant.

“We felt cheated when we came to know that UAL was setting up an asbestos plant,” says Ram Pukar Rai of Rampur Rajdhari, who has sold 16 decimal (0.064 hectare) land to the company. “We had given away our fertile land considering that the agromedicine plant will generate employment, while benefitting farmers who would grow crops required by the company. It was a unanimous decision of the village elders to check migration of the youth,” Rai adds.

The cheating by UAL has angered not only the residents of Chak Sultanpur and Rampur Rajdhari, but also of nearby villages who are determined not to allow the killer plant in the district. High-intensity or long-term exposure to asbestos causes asbestosis, a lung disease that often leads to lung cancer. Due to the health hazards, more than 50 countries have banned the use of asbestos. “Besides, the plant will heavily exploit groundwater. Little will then be left for us to grow crops,” Rai says.

Worse, the plant’s environment impact assessment (EIA) report mentions the land acquired by UAL as barren. The EIA report was prepared by Patna-based Shiva Test House. “The land here is so fertile that we grow three crops a year,” says Ram Iqbal Singh, retired havildar from the Indian Army. It was perhaps declared barren to help UAL get environment clearance, Singh alleges. Though the Bihar State Pollution Control Board (BSPCB) restricts construction of asbestos plant in the vicinity of schools and residential areas, UAL’s unit is barely 150 metres from a government school and 200 m from a hamlet with 50-odd houses.

Talking to Down To Earth (DTE), Dinesh Kumar, engineer-in-charge of BSPCB, says the board does not favour setting up polluting plants on fertile land. The land acquired by UAL was declared barren based on the certification of circle officer. Earlier, there was a small brick kiln on the site, he adds.

People accuse BSPCB of clandestinely supporting the asbestos industry. Last year, it had allowed Balmukund Cement and Roofing Ltd to set up an asbestos plant at Marwan in Muzaffarpur. The project was cancelled following protests.

Speaking to DTE, a senior UAL official said, “The protest has been started by a few people with vested interest. We are trying to ensure security to the unit. ”