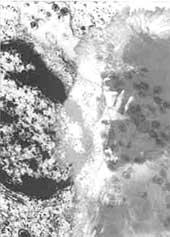 RECENTLY, AIDS drug researchers found two reasons to celebrate. Firstly, a new anti-viral drug that could help solve the drug resistance problem posed by HIV was developed. And secondly, the efficacy of a drug that protects monkeys from infection from a related virus called SIV was confirmed (New Scientist, Vol 148, No 2005).

Scientists at the National Cancer Institute, Washington DC, USA, believe that "the key to preventing the development of resistance may lie in structures within proteins called zinc fingers". Zinc fingers comprise four linked amino acids bound to an atom of zinc that helps maintain the three-dimensional structure of proteins. HIV contains two zinc fingers in the protein that protects its inner core. The team of researchers headed by William Rice found that unlike other components Of HIV that mutate quickly, evolving drug-resistant strains, zinc fingers do not.

"They have to stay the same for the virus to be able to multiply", says Rice. So scientists at the Institute targeted zinc fingers to control HIV. They identified several drugs from a family called disulphide -substituted benzamides (DIBS), which can remove zinc from the fingers, disabling the virus. To their relief, scientists discovered that HIV does not easily evolve resistance to these drugs.

In a series of experiments spanning a year, researchers resorted to a reliable method of producing mutant, drug-resistant viruses in cell cultures. By growing Hiv in white blood cell cultures and exposing them to DIBs at doses that are too low to disable the virus, they expected to produce mutant strains of the virus that are drug-resistant. But none appeared. This confirmed that DIBs are potent for holding HIV in control. "If zinc finger agents turn out to be as potent as these early experiments show, they might be very useful if we combined them with other drugs", says Clive Loveday, a virologist in London.

Meanwhile Che-Chung Tsai and his team at the University of Washington, Seattle, USA, got the first hint that administering a drug immediately after exposure to the HIV virus could possibly eliminate the virus.

Working on long-tailed macaques infected with SIV, which is similar to HIV infection in humans, the researchers gave a four-week course of a drug called PMPA to the monkeys. The drug administration began either immediately before they were exposed to SIV or up to 24 hours after. Significantly, no trace of HIV could be found in treated animals after 13 months.

How does PMPA work? It is discovered that it interferes with an enzyme called reverse transcriptase, which both the HIV and SIV need to reproduce. The function is similar to the leading AIDS drug AZT. But why is PMPA more effective? Scientists do not know. Though they believe that PMPA stays longer inside cells, as Tsai says "it is something we have observed, although we don't know why it happens so". While PMPA and similar drugs could be used to treat AIDS, the snag is that the people who are HIV positive do not know exactly when they contracted the disease. This shall however not deter scientists from their search for something that could eliminate the killer disease.