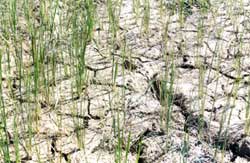 in the first-ever major study on monsoon in an Indian state, researchers have found that annual rainfall in Orissa has been declining significantly over the last two decades. There has been a small but steady decrease in the number of rainy days as well.

The rainfall has been less than normal over most parts of Orissa except the windward side of the Eastern Ghats during monsoon months, particularly during July, say U C Mohanty of the Indian Institute of Technology, Delhi, and M Mohapatra of the India Meteorological Department (imd) in a study published in the Journal of Earth System Science (Vol 115, No 2, April 2006). The maximum annual drop of 5-10 mm was recorded in southwest Orissa, including parts of Koraput, Bolangir and Kalahandi districts that are among the country's poorest. The scientists also found that rainy days in the region are decreasing by one day every five years.

Interestingly, an earlier study had found that the number of days with more than 12 mm rain across the country had come down by 78 per cent in the last 50 years, though days with less than 8 mm rain increased by 45 per cent, during the four-month monsoon period. The study was carried out by P V Joseph and Anu Simon at the Cochin University of Science and Technology in Kerala. "These are alarming findings for a country whose food production and the economy depend heavily on monsoon rainfall," the scientists had said in the August 25, 2005, issue of Current Science (Vol 89, No 4).

Orissa gets an average 1,167 mm of rain every year, almost 80 per cent of it during the monsoon. During this period, low pressure areas develop mainly over the Bay of Bengal, as well as over Bangladesh and nearby states such as Andhra Pradesh, Chhattisgarh and Jharkhand. These low pressure systems can bring showers under favourable atmospheric conditions.

Mohapatra, a doctoral student of Mohanty, says that over the years the number of depressions and deep depressions forming over the state has been decreasing, probably affecting the rain received. Earlier studies reveal that the number of cyclonic storms per year is reducing by one per decade: whereas the 1970s saw six cyclonic storms a year, the number came down to five in the 1980s and to four in the 1990s, he adds.

Mohanty, however, feels that there is no cause for panic. The observed decrease in rainfall between 1980 and 1999 may be because of what scientists call "monsoon epoch". A monsoon epoch lasts 30, 61 or 91 years. Half the epoch generally gets a higher-than-normal average rainfall, while the other half witnesses a slight decrease.

As India moves towards more region-specific monsoon or rainfall forecast, more such studies -- not just in numbers but depth -- will be required, says M Rajeevan, director of long-range forecasting at imd . He says that even regions adjoining Orissa such as Chhattisgarh and eastern Madhya Pradesh have been getting lesser rainfall in the last few years. Significantly, pressure formations over the Bay of Bengal are responsible for rainfall in all the three regions.

Early this year, the Union agriculture ministry announced a six-year plan to commence an extended-range weather forecast system to help give weather advisories at district levels. The weather information generated will be over a monthly and seasonal time scale. Currently, long-range forecast for the entire monsoon period and medium range forecast for less than seven days ahead are available.

While the latter leaves farmers with very little lead-time to plan their cropping activities, the annual monsoon forecasts are too broad to be of any specific use to farmers.