An analytical study of 100 years of rainfall data in Maharashtra reveals that rainfall seasonality index has risen alarmingly in all districts in the state. This could mean higher incidences of both prolonged dry spells and intense rainfall episodes in the state. Pulak Guhathakurta, senior scientist at India Meteorological Department, Pune talks to Aparna Pallavi about his study published recently in Journal of Earth System Science 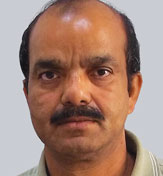 Why did you carry out this study?

With an increase in the number of disaster events, it is necessary to have information on district rainfall climatology. This would aid better disaster management and planning. This is the first in-depth, district-level climatological study. Most studies at the national level provide sub-divisional level information, whereas at the district level the variability is higher.

What does the study show?

It shows that all districts in the state have registered a drop in pre-monsoon and winter rains, and a rise in rainfall in the monsoon months.

How did you carry out the study?

We analysed rainfall figures from 1901-2000 obtained from 335 rain-gauge stations in the state. The data was organised into two chronological periods: 1901-1950 and 1951-2000. Using this data we calculated the seasonality index for each period. Seasonality index is calculated on the basis of mean monthly and annual rainfall, and helps in identifying rain distribution trends in a given region. A lower seasonality index indicates a more equitable distribution of rainfall throughout the year, whereas a higher value indicates that most of the rain is confined to a shorter wet season.

We found that a disturbing trend of falling quantum of rainfall in the pre-monsoon, post monsoon and winter seasons, corresponding with a rise in precipitation during monsoon months, resulted in a rise in the seasonality index. It was found that during the winter season (January and February), all districts in the western and central parts of the state are receiving less than 10 mm of rainfall, whereas during the pre-monsoon season (March to May), there is a definite shift in rainfall distribution with the high rainfall area shifting from the eastern to south-western parts of the state. A major shift in rainfall distribution identified by the study is the decreasing trend of rainfall activity from January to May in all districts in the state (with the exception of Latur, which saw a slight increase in rainfall in May). Increasingly, rainfall activity is getting confined to the monsoon months, which may hit agricultural activities in non-monsoon months.

What are the implications of your findings?

A higher seasonality index could result in less groundwater recharge, and could also impact pre-monsoon temperature and climate profiles in the form of higher summer temperatures and soil-moisture loss. In most parts of Maharashtra, mean summer temperatures are rising. More studies in the relevant areas would be needed to establish links between change in rainfall patterns and other changes.