Uttarakhand receives more rainfall in June than before 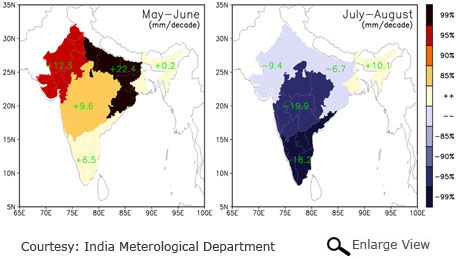 Weather prediction and disaster response have become issues fuelling the blame game between state officials in Uttarakhand. An analysis of rainfall data for the past five years, available on the website of the India Meteorological Department, points to changes in rainfall trends in India, with a greater number of incidents of excess rain in Uttarakhand in June. The trends in rainfall do not indicate the kind of disastrous rainfall the state received this year, but it does point to the necessity for a robust disaster management programme, which as of now does not exist in the state.


India receives more rain in May and June

Monsoon trends from 1961 to 2004 analysed by scientists show that the amount of rainfall received has increased in the months of May and June across India. In northwest India where Uttarakhand lies, this amount has increased by 22.4 per cent. The data also shows a decrease in rainfall in July and August. The northwest region receives 6.7 per cent less rain than before in these two months.

“June has more rainfall than before, while for July it is reducing. This change has to be acknowledged and the impacts should be studied,” says J Srinivasan, professor, Centre for Atmospheric and Oceanic Sciences, Indian Institute of Science, Bengaluru.

Feature: The aberrant behaviour of the Indian monsoon in June 2009