Rainfall stuck for five days as monsoon has not advanced towards north, says IMD

In a few days, monsoon is likely to advance over more parts of Chhattisgarh, Odisha and West Bengal, the remaining parts of coastal Andhra Pradesh and the Bay of Bengal 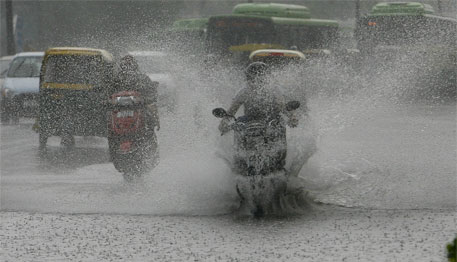 The weather agency said that monsoon had also advanced into the central Arabian Sea and some parts of northern Arabian Sea.

According to IMD officials, however, the Northern Limit of Monsoon (NLM) continues to pass through Veraval and Surat in Gujarat, Ujjain and Narsinghpur in Madhya Pradesh, Raipur in Chhattisgarh and Kalingapatnam in Andhra Pradesh. In the east, it is stuck in Krishnanagar and Darjeeling in West Bengal. It has not moved further in the past five days.

Rainfall was 20 per cent more than normal for the country as a whole, weather experts said. Maximum gains were made in Central India which received 57 per cent more rainfall than the area’s Long Period Average (LPA). Northwest India received 2 per cent less than normal rainfall.

The IMD also said that over 48 hours, the temperature in northwest India, will witness a rise by over 2°Celsius and a fall thereafter.